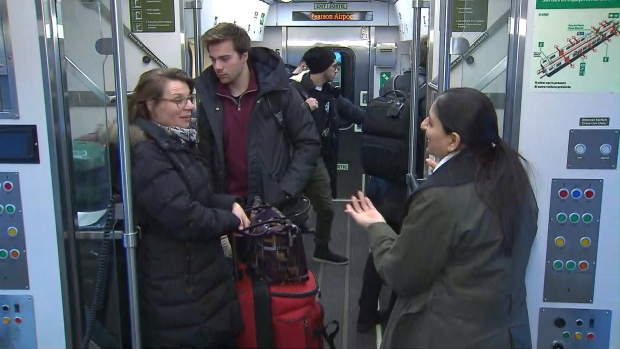 The head of a union representing TTC workers is calling for an independent inquiry into Metrolinx following the provincial transit agency’s decision to drop fares on the Union Pearson Express amid sagging ridership.

Amalgamated Transit Union Local 113 President Bob Kinnear told CP24 on Thursday that Metrolinx’s inability to project ridership on the $456-million train leaves him “very concerned” over whether the agency is qualified to manage and properly plan for its other projects, including the still-under-construction Eglinton Crosstown LRT.

“I think that everybody should be concerned. The citizens, the Toronto Transit Commission as well as the commissioners,” he said. “We are calling for an inquiry to ensure that this transit planning is moving forward in a beneficial way and that we are maximizing our resources.”

Metrolinx initially set the one-way adult fare for the UP Express at $27 but when ridership failed to materialize the agency was forced to scramble, announcing earlier this week that it would cut the fare to $12, or $9 with a Presto card.

The decision to reduce fares came after the release of data indicating that ridership hit a monthly low of 65,593 in November and only rebounded slightly in December with a total of 67,229 riders.

That meant that trains were operating at about 10 per cent capacity on average.

Provincial officials have so far declined to say what impact their decision to lower fares will have on their ability to cover the operating costs for the train.

“Our understanding is that they are only generating about one-third of the revenue that they believed they were going to be able to generate. Now they have reduced the costs to less than 50 per cent which means that just to maintain the revenue they will have to double the ridership,” Kinnear said. “It is very, very concerning that the people who are heading up Metrolinx don’t seem to have any idea of how to meet their objectives.”

While Metrolinx has maintained that the disappointing ridership numbers on the UP Express will eventually correct themselves as Torontonians are introduced to the service, Kinnear said he does not share that confidence.

The union boss also said that he is increasingly worried about the financial planning Metrolinx has done for the Eglinton Crosstown LRT, which will be operated by the TTC once built.

“I believe transit in next years will be the next financial debacle unless experts have an opportunity to analyze the projections that they are projecting,” he said.

The new fares for the UP Express will go into effect on March 9.