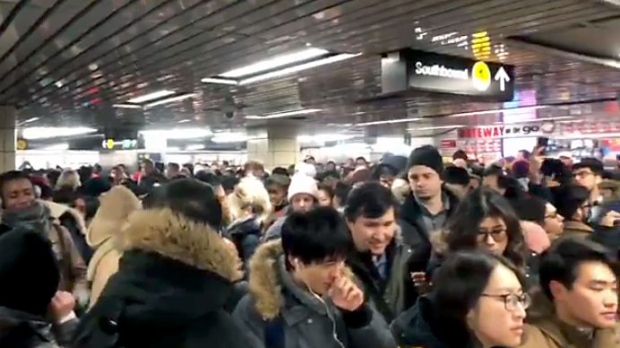 An official with a union representing the TTC’s front-line workers is slamming Mayor John Tory’s 10-point plan to reduce overcrowding on the transit system as a “phony” document full of “band-aid solutions.”

Tory released the plan earlier this week in the wake of a number of high-profile service interruptions.

The plan is divided into five things that the TTC is doing right away to reduce overcrowding and another five that it will do in the weeks and months ahead.

The immediate measures include the addition of two trains to supplement service on Line 1 during the morning rush hour and the deployment of additional platform staff at St. George and Bloor-Yonge stations to manage overcrowding.

The near-term initiatives, meanwhile, include a plan to look at using enhanced express bus service to help ease overcrowding and another plan to study lower fares for off-peak hours in order to incentivize people to stagger their commute times.

Packaged together, the initiatives will carry a cost of about $3 million in 2018.

“I think it is pretty much a phony plan,” Amalgamated Transit Union Local 113 Secretary-Treasurer Kevin Morton told CP24 on Saturday morning. “A few of the bulletins address some of the issues in the short term but they are more band-aid solutions. What the mayor has refused to do and the mayor before him as well is address the idea that more funding is needed.”

Morton said that some of the current overcrowding issues have been “exacerbated” by the fact that the TTC has had to use its extra buses to replace aging streetcars on a number of routes amid delays in the delivery of the city’s new streetcar fleet from Bombardier..

Those buses, he said, might have otherwise been used to help the TTC “mitigate” overcrowding elsewhere in the system.

Of course, Morton said the issues the TTC faces couldn’t be adequately resolved through buses.

“We need money and we need it now,” Morton said. “Ridership has not grown in the last four years and you know why? Because no one can find a seat or a place top stand on the subway. People are not going on the transit system because there is no room and the only way you can add room is expand.”

Morton said that Tory “needs to ask the Ontario government to commit to more funding” for transit, though it should be noted that the mayor has been vocal on that subject in the past and on Tuesday he told reporters that he planned to redouble his efforts to get all provincial leaders to commit to funding part of the relief subway line.

“I am going to be pressing very hard with the leaders of all the parties. They are going to have to say yes or no,” he said at the time. “They are either going to provide the support to the TTC for regional transit needs or they are not. If they say no or are uncertain about that I think the voters will exact a price for that.”