TTC vehicles were involved in more than 4,000 collisions last year 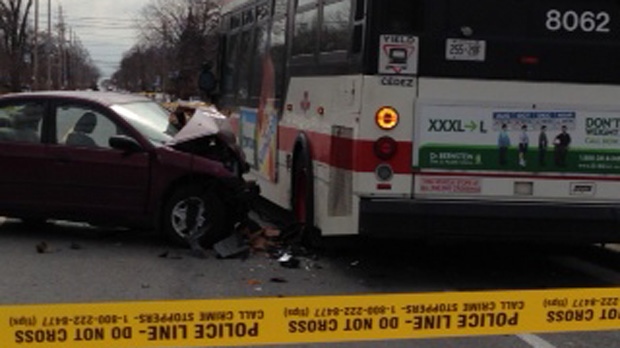 A vehicle involved in a collision with a TTC bus on Royal York Road on March 3, 2013 is shown. (Jackie Crandles/CP24.com)

TTC vehicles were involved in more than 4,000 collisions last year, though a spokesperson for the transit agency cautions that nearly three quarters of them were out of the control of its drivers.

According to the TTC, there was a total of 4,001 collisions involving its vehicles in 2017, which is up slightly from the 3,788 collisions recorded the previous year.

The number is a catch all figure that includes minor and major collisions as well as other incidents that result in damage to vehicles, such as a streetcar or bus being bumped by an errant shopping cart.

“It is important that we count everything that comes into contact with a vehicle so if someone bumps us with a shopping cart or cuts off and hits a streetcar or bus with an SUV it all gets recorded. As does every minor bump that happens in a garage,” TTC Spokesperson Stuart Green told CP24 via email. “Also, nearly three quarters of these incidents are people or things contacting us in a way that's out of our control.”

The TTC deploys about 2,000 surface vehicles on city streets every day.