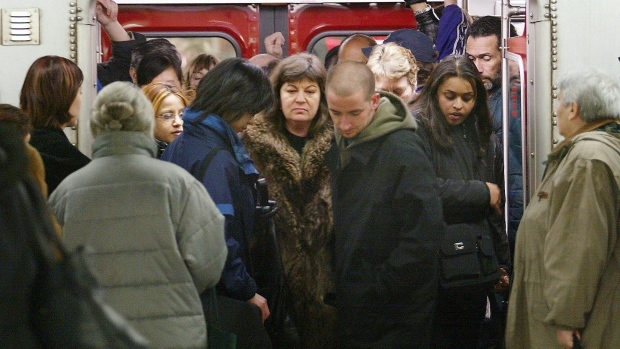 In February, Mayor John Tory introduced a ten-point plan to address overcrowding across the transit system in the wake of a number of high-profile service interruptions.

The plan called for the TTC to immediately add two trains to supplement morning rush hour service on Line 1, deploy additional platform staff at St. George and Bloor-Yonge stations to manage crowding and look into using express bus service along Yonge Street to further relieve overcrowding on the subway.

Though some of the initiatives have already been implemented, others are still in the planning stage.

At today’s meeting, the TTC board approved a report from staff that recommends the addition of a third train along Line 1 during rush hour rather than providing express bus service, as recommended by Tory.

The report says that the additional train could be added to the line in September, provided that the measure is approved by the board. It would carry an annual cost of about $2.4 million.

Furthermore, the report suggests providing additional service north of Sheppard West Station between 6 p.m. and 9 p.m. by “adjusting schedules to improve train movement at Wilson Yard.” It also says that the TTC can provide “more reliable and predictable travel for customers” through infrastructure improvements at Wilson Yard, which are expected to be completed by September. Those improvements would “minimize conflicts with work cars returning to the yard in the early mornings,” according to the report.

“These improvements will reduce wait times and crowding, improve the predictability and consistency of service and enhance the transit network,” the report states.

The report notes that overcrowding on the Yonge line is at a “historic” level with 28,000 to 30,000 riders travelling south of Bloor-Yonge Station per hour during the morning rush.

The report, however also takes a look at crowding system-wide.

It also calls for seven new express bus routes to be introduced between 2019 and 2021, which was an initiative that was previously announced by Tory but requires approval by the board to take effect.

The new express routes are as follows.