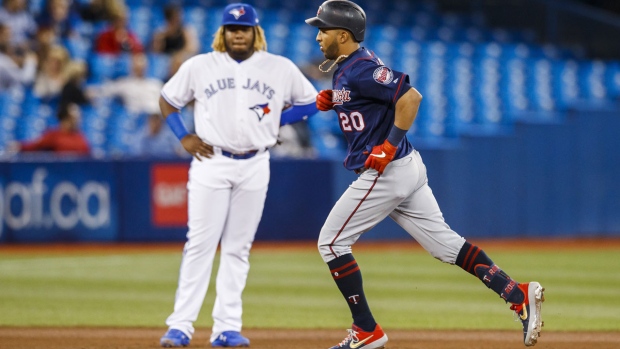 TORONTO -- Martin Perez had nine strikeouts over seven shutout innings and the Minnesota Twins belted three homers in an 8-0 rout of the Toronto Blue Jays on Monday night at Rogers Centre.

Jason Castro, Eddie Rosario and Jorge Polanco went deep for the Twins (21-12), who outhit the Blue Jays 12-3 and were in control from the start.

Toronto starter Marcus Stroman (1-5), meanwhile, was touched up for five earned runs and eight hits over 4 2/3 innings. His earned-run average jumped to 2.96 from 2.20.

Blue Jays skipper Charlie Montoyo was tossed in the fifth inning after disputing umpire Adam Hamari's called third strike to Brandon Drury. It was Montoyo's first ejection of the season.

Stroman was looking to bounce back after lasting 3 1/3 innings in his previous start. But he couldn't find an early rhythm, giving up a pair of singles in the opening frame before a botched pickoff attempt led to an unearned run.

Shortstop Freddy Galvis was charged with an error when he couldn't come up with Stroman's throw to second base, allowing both runners to advance. Rosario then drove in Polanco with a slow grounder to second base.

The Twins took advantage of Toronto's suspect defence again in the second inning.

Teoscar Hernandez misjudged a Jonathan Schoop line drive in left field, waving at the ball as it sailed over his head and off the wall for a double.

Castro belted the next pitch off the facing of the 200 level in right field for his fourth homer of the year.

Perez had no trouble the first time through the Toronto order with a walk to No. 9 hitter Danny Jansen the lone hiccup.

Schoop and Byron Buxton had doubles in the fourth inning as the Twins tacked on two more runs. Toronto's first hit came in the bottom half of the frame when Galvis led off with a single.

Galvis moved to second on a walk to Justin Smoak but Guerrero, batting just .152 since his callup from triple-A Buffalo, hit into an inning-ending double play.

Rosario's fifth-inning solo shot to straightaway centre -- his 12th homer of the year -- ended Stroman's night. The Toronto right-hander gave up two walks and struck out a pair.

Polanco hit a solo shot off reliever Daniel Hudson in the seventh inning for his sixth homer of the season.

Castro was hit in the right arm by a pitch in the eighth inning. The Twins said he is day to day with an elbow contusion.

Announced attendance was 12,292 and the game took two hours 52 minutes to play.

Notes: Twins right-hander Jake Odorizzi was named American League player of the week on Monday. He earned two victories last week and didn't allow a run over 13 innings pitched. ... Toronto's Aaron Sanchez (3-2, 3.09) is scheduled to start for the Blue Jays on Tuesday against fellow right-hander Jose Berrios (5-1, 2.91). ... The Blue Jays will get an off-day Thursday before completing their six-game homestand with a weekend series against the Chicago White Sox.