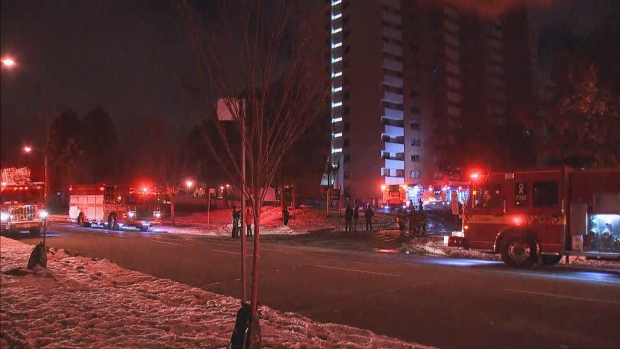 No injuries reported after a two-alarm fire broke out at a Scarborough highrise. (CP24)

A two-alarm blaze at a Malvern highrise in Scarborough has been knocked down.

Toronto Fire said they were called to an apartment building on 250 Brenyon Way, near Tapscott and Nielson roads, just after 9:30 p.m. by an alarm company

When crews arrived, there were visible flames and falling glass, as well as, heavy smoke billowing out of a balcony.

The fire was located on the 22nd floor, said Toronto Fire, adding it possibly started in a toaster.

Occupants made their way out of the unit. There are no reported injuries at this time.

Toronto Fire said the power was knocked out of the building.

The southbound lane of Sewells Road at Brenyon Way is closed due to the fire.