Two busts lead to seizure of $17M worth of drugs, including 'hugely significant' amount of fentanyl: police 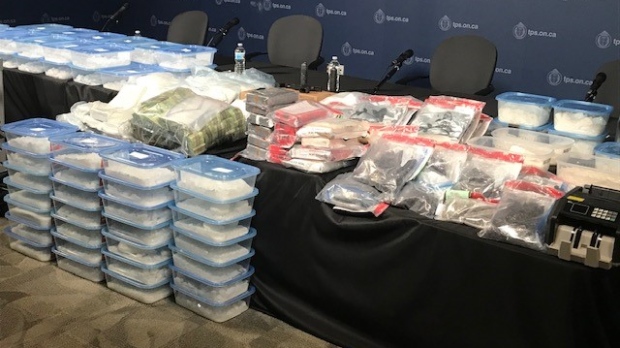 A large quantity of drugs recently seized by Toronto police as part of two separate investigations is shown. (Ron Dhaliwal)

Two separate busts last month have led to the seizure of more than $17 million worth of drugs, including an amount of fentanyl that police say would be enough to result in millions of fatal overdoses.

Police announced the busts during a news conference on Thursday afternoon.

They said that the first investigation began in November after police received information about a man trafficking drugs in the city. They said that 23-year-old Onyejebechi Ifesimeshone, of Vaughan, was then arrested on Nov. 15 as officers executed search warrants at three different properties, including an address in Vaughan.

Police say that it was during the execution of those search warrants that a large quantity of drugs was seized, including more than 10 kilograms of cocaine, 767 grams of fentanyl and more than 67 kilograms of crystal methampahentime.

The total street value of those drugs is pegged at around $8 million.

Just days later on Nov. 19 police made another multi-million dollar bust while investigating an alleged clandestine lab in Mississauga that they say was being used a “fentanyl cutting lab.”

Police also seized more than $500,000 in Canadian currency, two firearms, two silencers, a quantity of ammunition and a press that is believed to have been used for making fentanyl into brick form.

The street value of the drugs seized during the second bust is pegged at $9.7 million.

Bayaan Abdalla Jadid, 26, of Edmonton is facing 16 charges in connection with the second investigation.

“If not intercepted this extremely large quantity of crystal methamphetamine, cocaine and perhaps most disturbingly fentanyl would have found its way into all our neighbourhoods,” Supt. Steve Watts said during a press conference to announce the busts. “It is impossible to know how many overdoses this quantity of product will have prevented by being seized, how many fewer gang-related shootings would have happened and how many fewer overdose patients would have to be treated by EMS or by our hospital emergency departments particularly during the current pandemic that faces us.”

Watts said that the seizure of 33 kilograms of fentanyl is a “hugely significant sum” given the potency of that drug.

In fact, he said that 2.5 milligrams of fentanyl is all that is needed for a fatal dosage so the amount seized by police could at least theoretically be enough for millions of fatal doses.

“In front of you we have 33 kilograms. So therefor you are looking at over 13 million possible fatalities,” he said. “It is an incredible seizure with an incredible toxicity.”

Both suspects remain in police custody and are expected to appear in court later this month.