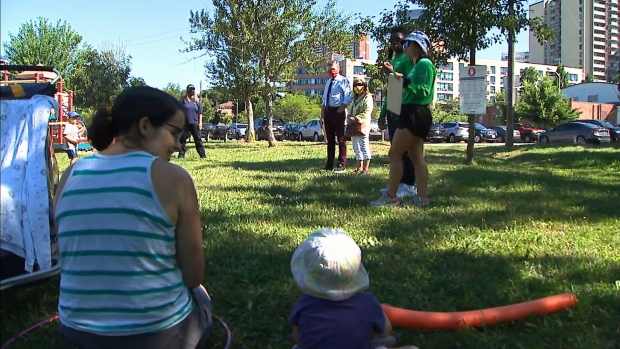 A month after modified city-run summer camps opened amid the COVID-19 pandemic, a camper has tested positive for the virus.

The camper attended a CampTO program at the Barbara Frum Community Centre and was sent home with symptoms last week. The child has been self-isolating ever since, according to a City of Toronto press release.

Out of an “abundance of caution,” CampTO programs at both the Barbara Frum Community Centre and the Glen Long Community Centre have been closed for the remainder of the week, the city said.

City staff said a small number of children from the Barbara Frum camp also visited a camp at the Glen Long Community Centre, potentially exposing both locations to the virus.

No other campers or staff have reported any symptoms, city staff said.

Each centre will undergo a deep cleaning before the CampTO programs are set to resume on Monday, Aug. 17.

The city is in the process of notifying families who have children that attended both CampTO locations, as well as camp staff.

Families of children who attended the camp locations from Aug. 4-12 and had direct contact with the infected camper will be contacted by Toronto Public Health.

According to the release, those who are considered to be at high-risk of exposure will be instructed to seek testing and self-isolate for a symptom-free period of 14 days.

Those who are considered low-risk will be advised to self-monitor for symptoms and seek testing if they become symptomatic.

City staff said campers who test negative, remain asymptomatic and are not required to self-isolate will be able to return to the CampTO locations on Monday.

The 118 other CampTO locations will continue to operate as normal.

Each camp group also stays together in a cohort for the entire week and does not interact with other campers.

The modified summer camp program began on July 13 and offers day camps for children from six to 12 years old across the city.

About 4,500 children had signed up for CampTO as of mid-July.