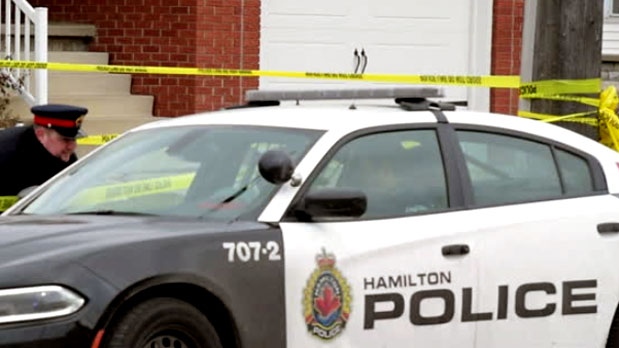 A Hamilton police cruiser is seen in this undated file photo.

Hamilton police say two teenagers are facing charges after they allegedly brought weapons to a high school in the city.

Police say that on Friday afternoon an on-line feud between two youths resulted in one of them going to Glendale Secondary School with an adult friend armed with a small hatchet and pocket knife.

Investigators say the two didn't find the person they were looking for and fled after school officials told them that the police had been called.

Police say they subsequently charged two Hamilton males -- a 17-year-old and an 18-year-old.

The incident follows the stabbing death last Monday of 14-year-old boy outside his Hamilton school.

Devan Bracci Selvey died in the arms of his mother, who said he'd been bullied in the weeks leading up to his death.

His funeral was held yesterday.

Two teens - an 18-year-old man and a 14-year-old boy - have been charged with first-degree murder in the case.

This report by The Canadian Press was first published on Oct. 13, 2019