Two injured after fire at apartment building in Weston 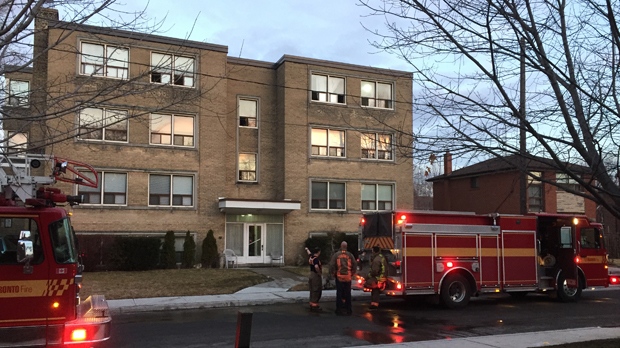 Firefighters are seen outside a low-rise apartment building in Toronto's Weston neighbourhood on March 9. (Mike Nguyen/CP24)

Toronto paramedics say a man and a woman in their 50s are suffering from smoke inhalation after they were pulled from an apartment building in Toronto’s Weston neighbourhood that caught fire early Wednesday morning.

Toronto firefighters say they were called to a residence at 50 John Street, near the intersection of Weston Road and Lawrence Avenue West at 5:19 a.m. Five minutes later, the fire went to two alarms.

A caller told firefighters there was heavy smoke coming from the third floor of the building.

Firefighters say they pressurized the building’s main stairwell when they arrived to keep it free of smoke.

Paramedics say the two victims were taken to a local hospital.