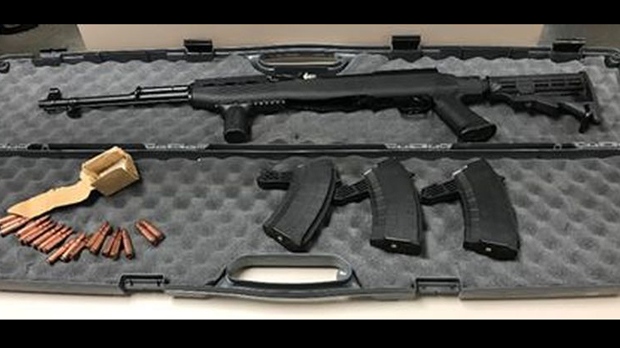 A 7.62mm SKS rifle, magazines and ammunition are seen in a handout image from Toronto police.

Two men are facing 20 charges each after cocaine and a powerful rifle were allegedly found in their vehicle during a traffic stop in Scarborough on Thursday.

Toronto police say that officers were conducting an investigation in the Highway 401 and McCowan Avenue area when they stopped a vehicle with two men inside.

Two men, identified as Jaspal Bhatti, 22, of Toronto and Sujan Balasubramaniam, 19, also of Toronto were taken into custody.

Both are facing charges including trafficking cocaine, possession for the purpose of trafficking, careless storage of a firearm and possession of proceeds of crime.

Both appeared in court at Old City Hall on Friday.

Anyone with information about this incident is asked to call police at 416-808-6100.