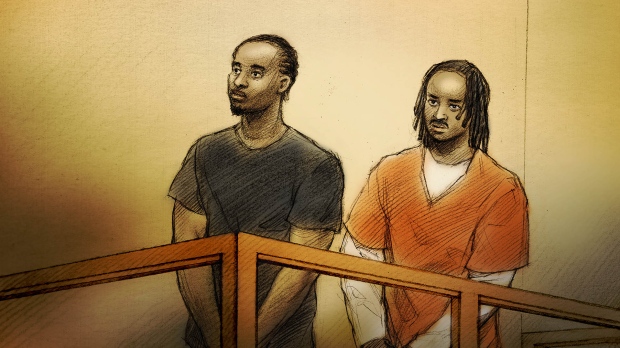 Two Toronto men have been arrested and charged in connection with a fatal shooting at an apartment tower in Scarborough’s West Hill neighbourhood on Tuesday.

Emergency crews were called to the area of Galloway Road and Lawrence Avenue East at around 3 p.m. Tuesday for reports of shots fired nearby.

Officers said the male victim was rushed to hospital from the scene via emergency run without vital signs.

He was pronounced dead a short time later, investigators said.

On Wednesday, police identified the victim as 25-year-old Dean Howlett of Whitby.

On Friday, police said they arrested two men in connection with the incident.

Naod Tsegazab, 22, was charged with one count of second degree murder.

Joseph Carlton Bryan, 22, was charged with one count of accessory after the fact to murder.

Both men are expected to appear in Toronto East Court on Markham Road on Friday.

The scene of a fatal shooting in Scarborough's West Hill neighbourhood on Feb. 12, 2019 is seen.