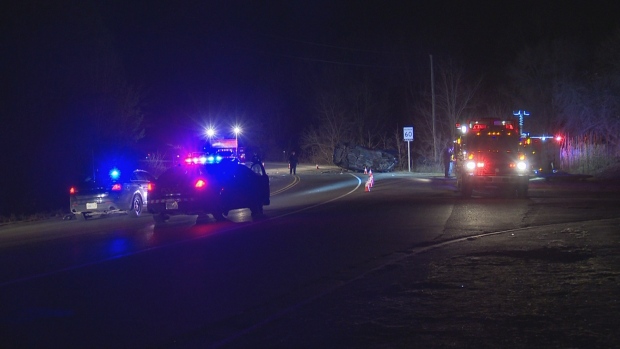 Police are investigating a two-vehicle collision in Brant that left two men in their 20s dead. (CTV News/David Ritchie)

Two men in their 20s are dead following a two-vehicle collision in Brant County Saturday evening.

Emergency crews were called to Vanessa Road, west of Highway 24, around 7:45 p.m.

Ontario Provincial Police Const. Ken Johnston said that the drivers of both vehicles were pronounced dead on the scene.

A passenger in one of the vehicles, a 29-year-old, was taken to a local hospital with injuries.

On Sunday, the OPP have identified the victims as 25-year-old Michael Kovacevic, of Stoney Creek, and 29-year-old Dillon Henry from Norfolk County.

Johnston said one of the vehicles was travelling west while the other was eastbound at the time of the incident. What led to the collision is under investigation.

A third vehicle was also struck following the initial collision, the OPP said. The driver was not injured.

Roads in the area were closed as the OPP’s collision reconstruction team conducted their investigation. They have since reopened.