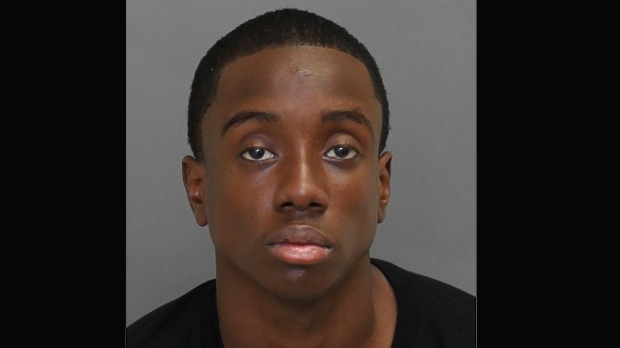 Toronto police have laid attempted murder charges against two men after a 31-year-old man was shot and pepper-sprayed in the Keele Street and Wilson Avenue area earlier this month.

The incident took place on July 16 on Paxtonia Boulevard.

Police say a known associate of the victim drove him to the back of an apartment building under false pretenses around 1:45 p.m.

Two other men were waiting for the victim when he arrived at the building’s parking lot and one of them was armed with a gun, police say.

A struggle ensued when the two men approached the victim and the victim was shot in the groin. He was also pepper-sprayed in the face by the man who brought him to the back of the building, police say.

The victim was rushed to hospital with serious injuries, Toronto EMS told CP24 at the time.

On July 25, police executed search warrants at three different addresses in the city in relation to the incident.

On Tuesday, police said two Toronto men have been arrested.

Dominique Wilks, 22, has been charged with conspiracy to commit murder, attempted murder, assault with a weapon, administer noxious thing, two counts of fail to comply – recognizance, and fail to comply – undertaking.

Abel Abdo, also 22, has been charged with conspiracy to commit murder and attempted murder.

Both men made an appearance in a Toronto courtroom Tuesday morning.

One suspect, 22-year-old Jonathan McLennan, is still outstanding and believed to be in the GTA, police said Tuesday.

He is described as a black male standing five foot six, weighing around 145 pounds with a skinny build. Police say he is young looking, with short black hair, brown eyes and a distinctive limp when he walks.

Anyone with information about his whereabouts is asked to call police.