Two overdose prevention sites that had funding cut off to receive $20,000 donations 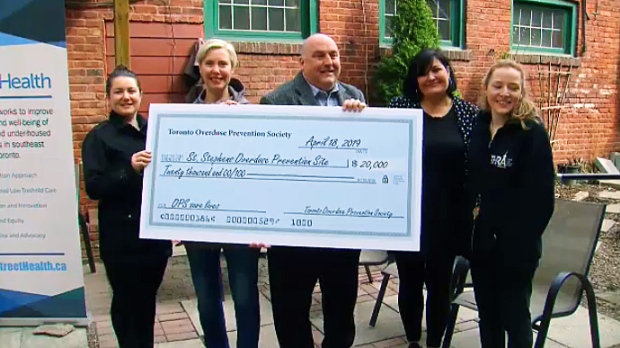 The Toronto Overdose Prevention Society will donate $20,000 each to two supervised injection facilities that had their provincial funding cut off last month.

In March, the provincial government announced that it would fund 15 supervised injection facilities, including six in Toronto.

The province, however, opted not to fund facilities at six other sites. Those sites included the St. Stephen’s Community House on Augusta Avenue and Street Health Community Nursing on Dundas Street East.

Both sites did receive an exemption from Health Canada to continue operating but their fate has been up in the air due to the abrupt loss in funding.

On Thursday the Toronto Overdose Prevention Society said that it would allocate $20,000 in community donations to each facility. That money will be enough to cover the staffing and operational costs at each facility for about a month.

“This is a really great day for us in the short term but it is not a long term solution,” Street Health Community Nursing Executive Director Kapri Rabin said during a press conference to announce the donations. “We are in negotiations with anybody that is willing to talk to us. We have got individual donations, we are having conversations with different levels of government and we are reapplying to the provincial government because we really believe that these sites need to continue operating. We are looking at every option we can.”

The Toronto Overdose Prevention Society began running an unsanctioned supervised injection facility in Moss Park back in August, 2017 when no other facilities existed and raised money from the community to operate that site.

One of the organizers of the group, Zoe Dodd, said that donations have continued to come in despite the initial Moss Park facility moving to a permanent home indoors. She said that the $40,000 being given to Stephen’s Community House and Street Health Community Nursing is the result of those donations.

“It is very stressful, as someone who works in a site, to be operating like this and to not know whether we will have to close doors on people and when we close doors on people that costs lives and we carry that,” she said. “In British Columbia they have rented refrigerator trucks to cool bodies because the morgues are so full. That is the emergency we are in right now.”

Dodd said that there have been more than 80,000 visits to the supervised injection facilities operating in Toronto. She said that staff at those facilities have also reversed more than 1,700 overdoses.

“We are in a devastating crisis,” she said.

In addition to the cessation of funding to the supervised injections sites at Stephen’s Community House and Street Health Community Nursing, the province has said that it is continuing to review a city-run site at the Toronto Public Health building on Victoria Street.