Two people dead after vehicle crashes into pole in Mississauga

At around 7:15 a.m., police received a call about a single-vehicle collision at Burnhamthorpe Road and Promontory Drive.

A vehicle was driving westbound on Burnhamthorpe Road and crashed into a light pole, police said.

The vehicle then burst into flames.

“We arrived, and there was one vehicle involved, it was on fire. Mississauga fire was able to put that fire out,” Const. Heather Cannon told reporters at the scene Saturday morning.

One person was found on the roadway and another was located in the vehicle. Both people were pronounced deceased at the scene, Cannon said.

Peel paramedics told CP24 that the victims are two adults.

No other details about the deceased have been released.

The vehicle has been covered with a tarp for privacy reasons as police investigate. 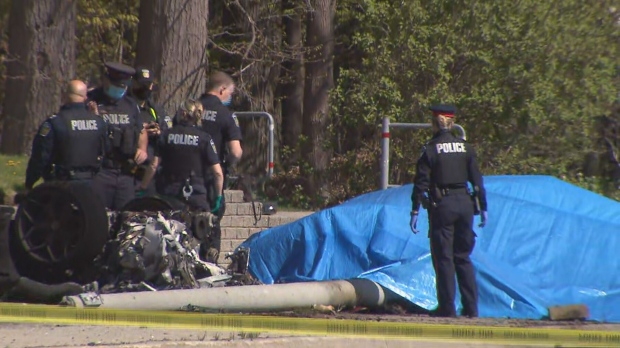 Neighbours in the area told CP24 that the vehicle was a red Ferrari.

One resident described the crash as a big “fireball.”

A coroner has arrived at the scene. 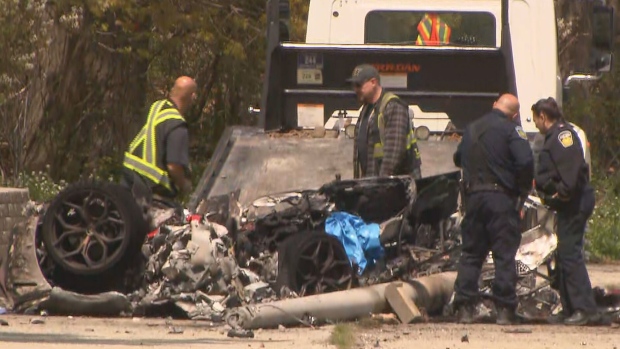 Cannon said police are busy gathering evidence and are asking residents in the area if they have witnessed anything.

“We are asking anybody that was in the area that may have dashcam video, that may have heard or seen anything, if they can please contact our major collision bureau and they can assist us with that,” Cannon said.

Burnhamthorpe Road between Mississauga Road and The Credit Woodlands was closed for several hours but has since reopened.

Two people are dead after a single-vehicle collision in Mississauga Saturday morning.