Police say that two people are dead after a transport truck and an SUV collided on the Queen Elizabeth Way highway in Mississauga Saturday morning.

It happened just after 4 a.m. as the SUV was merging onto the eastbound lanes of the QEW from Hurontario Street, according to OPP Sgt. Kerry Schmidt.

The two occupants of the SUV were both pronounced deceased at the scene of the crash. Investigators are working to confirm the identities of the female driver and male passenger.

The driver of the transport truck was not injured.

Police say that dashcam video of the incident has been viewed by investigators.

The eastbound lanes of the QEW are closed at Hurontario for the investigation and expected to reopen at noon. 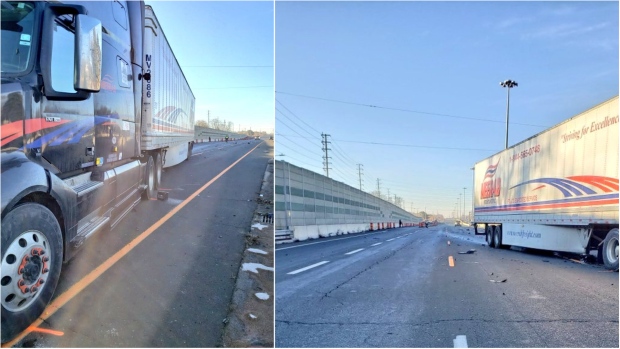 A crash on the QEW in Mississauga has left two people dead. (Twitter/OPP Highway Safety Division)