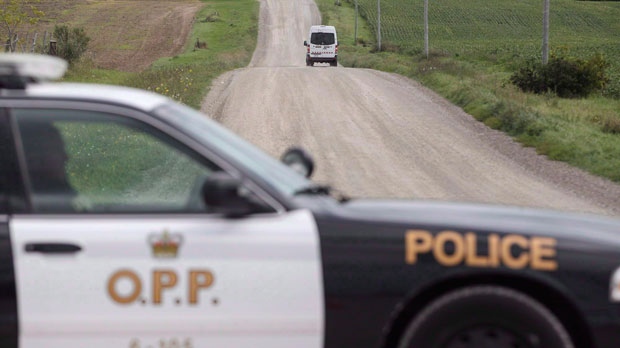 An OPP vehicle blocks a road north of London, Ont.

Two Ottawa residents have been killed in a plane crash in Northumberland County.

The incident happened Saturday evening in a field near a private air strip in rural Port Hope, near Kellogg and Massey roads.

The two occupants of the plane – a Cherokee Piper aircraft – have been identified as 74-year-old Alvin Crosby and 72-year-old Suzanne Parent, both of Ottawa. They were both pronounced dead at the scene.

The OPP have since cleared the scene.

The #NthldOPP are currently at scene of a downed aircraft in rural Port Hope in @Nthld_County. The aircraft is a small passenger type aircraft. Emergency crews are assessing the situation and more information will be provided when available.^rs pic.twitter.com/IgXcVpKlvN

The Transportation Safety Board of Canada is now working to determine the cause of the crash.