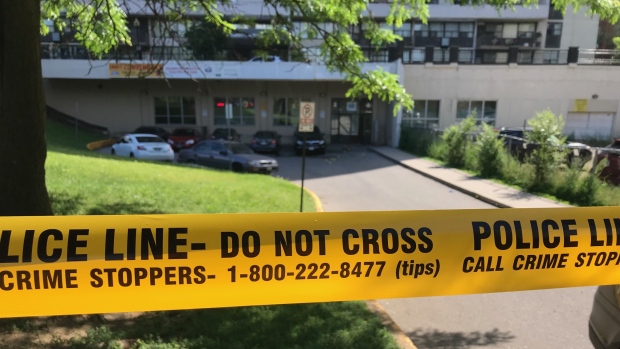 Police tape is shown at the scene of a double homicide investigation at a building on Emmett Avenue on Saturday. (Craig Wadman)

Two men are dead, including one who was confined to a wheelchair, after a shooting at an apartment building in the city’s Mount Dennis neighbourhood early Saturday morning.

Police were called to the building on Emmett Avenue in the Jane Street and Eglinton Avenue area at around 1:30 a.m. for a report of the sound of gunshots.

Police say that two men were subsequently located outside of the building without vital signs. One of them was pronounced dead on scene while the other was rushed to hospital but later died.

A third man, meanwhile, took himself to hospital with serious injuries. Police say that they now believe that individual was shot at the Emmett Avenue building as well.

“The evidence indicates that the three people who were shot were in the front area (of the building) just socializing and then out of nowhere the suspect came out and opened fire,” Police Chief Mark Saunders told reporters at the scene on Saturday afternoon. “There is no doubt based on the evidence that this was in fact a very targeted crime.”

The suspect in the shooting has been described as a black male, who is about six feet tall with a muscular build and short dreadlocks.

Saunders said that officers are currently canvassing the neighbourhood surrounding the building in the hopes of finding eyewitnesses or surveillance camera footage that could shed further light on the suspect’s identity.

The suspect should be considered “armed and dangerous,” according to Saunders.

“It is still early and there is a good potential of solving this particular investigation, so we are making the appeal to see if we can get people to come forward and help out,” he said. “You may have seen someone running along Jane Street, along Trethewey Drive or even along Emmett Avenue and if you had a dash cam and you were driving by at that time that is what we would be looking for. Anything in any shape or form that adds that extra piece to this puzzle would be a great benefit in solving this crime.”

Forensic officers are currently combing the scene for evidence.

Saunders said that no weapons have been located so far.

A police vehicle is shown at the scene of a double homicide investigation in the Jane Street and Eglinton Avenue early Saturday morning.