Crews are busy cleaning up after a powerful tornado touched down in southern Barrie on Thursday, with two people remaining in hospital and at least 71 homes deemed unsafe.

First responders have switched from emergency operations to recovery and support for the community after ensuring all people were accounted for in the aftermath of the tornado.

Barrie Fire Chief Cory Mainprize said crews are working to remove massive amounts of debris from the scene and inspecting homes to ensure they’re safe for residents to return to.

“A lot of clean-up took place yesterday, and a lot more is scheduled to go on today. And all of our city operations crews as well as some public and private sector disposal companies are working together to get debris open so vehicles can travel roadways,” he told CP24 Saturday morning.

“And a lot of work is being done through our building services and insurance companies with engineers to determine the status of buildings,” he added.

At around 2:40 p.m. on Thursday, an EF-2 tornado ripped through the city, tracking from the miniature golf course on Huronia Road and Mapleview Drive and continuing east towards Prince William Way, according to Environment Canada.

Ten people sustained injuries and were treated in hospital. Mainprize said two still remain in hospital with serious but non-life threatening injuries but the others were discharged home. 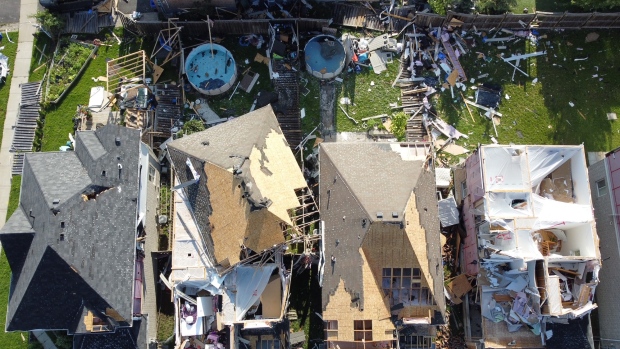 The tornado produced winds of up to 210 kilometres per hour and damaged over 100 structures and left roughly 9,000 homes and businesses without power.

“We've got about 60 structures that are of significant concern right now. There's well over 100 that have been damaged, but we've got about 60 that people will not be able to return to, at least for the near future and some will be much, much longer term,” Mainprize said.

In a news release issued Saturday afternoon, the city said there are 71 homes that "have been deemed unsafe to enter."

The city is working with the Red Cross and Salvation Army to find living accomodations for the families who will be displaced for some time, Mainprize said.

“Everyone had alternative housing put in place to this point in time, but some of those people will be looking for some long-term housing because some of those houses will have to be unfortunately destroyed, and start to build again,” he said.

Roughly 70 homes were still without power as of Saturday afternoon but Mainprize said power is expected to be restored to the homes that are habitable by the end of the day. For the rest of the weekend, Mainprize said the crews will focus on cleaning up the tornado site and assisting affected residents with any immediate needs.

City officials are asking people not to bring anymore donations to the scene as an overwhelming amount of items have already been dropped off.

However, anyone looking to donate items or their assistance can be added to a wait list by emailing ServiceBarrie@barrie.ca.

Monetary donations can be made to the Salvation Army by dropping them off at their 16 Bayfield Street location or by visiting their website.