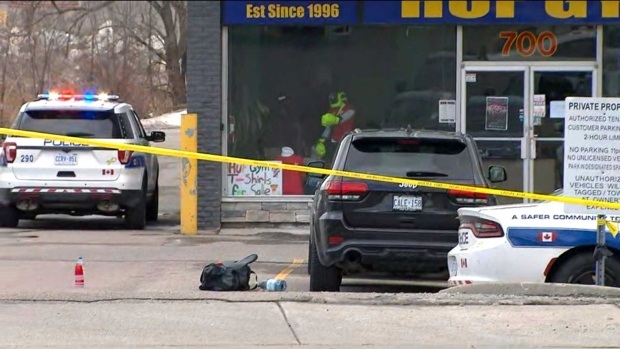 Police respond to a shooting in the area of Dundas Street East and Cawthra Road in Mississauga Monday March 11, 2019.

Two men have been arrested and one additional suspect is wanted in connection with the fatal, daylight shooting of a 32-year-old man in the parking lot of a commercial plaza in Mississauga on Monday.

Police say 32-year-old Mississauga resident Michael Deabaitua-Schulde was shot and killed in a parking lot near Dundas Street East and Cawthra Road in Mississauga shortly after 11 a.m. on Monday.

The incident, according to police, occurred in view of people who were exercising at a nearby boxing gym.

Police say they believe the perpetrators fled the scene in a getaway vehicle, identified as a blue Honda Civic.

The vehicle was found in flames in the area of Rymal and Tomken roads a short time after the shooting.

Police say Deabaitua-Schulde, who was a “well-entrenched member” of the Niagara chapter of the Hells Angels motorcycle gang, was the “target” of the attack.

Two suspects in the shooting were arrested in Montreal on Wednesday night.

The two men are currently in custody in Montreal.

Police have also issued a Canada-wide warrant for a third suspect, identified by police as Joseph Pallotta, 38.

Pallotta, who is from the Saint-Leonard area of Quebec, faces one count of first-degree murder and police say he is considered to be armed and dangerous.

While not members of any outlaw motorcycle gang, police allege that all three of the suspects have ties to organized criminal activity.

Police would not comment on a potential motive for the attack.

“The murder occurred in broad daylight outside a gym located in a busy strip mall… (It) is an example of the reckless disregard for public safety that criminals have,” Peel Regional Police Chief Chris McCord said at a news conference on Thursday.

“Such brazen violence causes me and our community great concern. I want to ensure the community that we will not tolerate this kind of violence.”