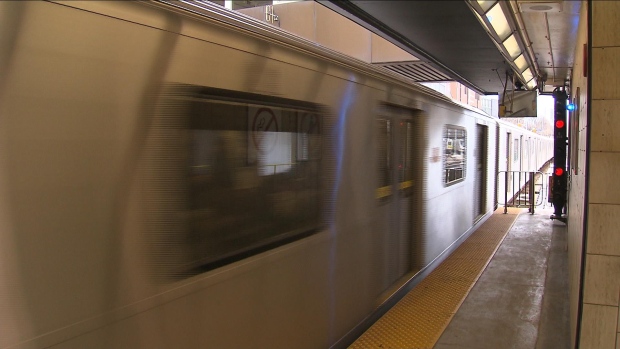 The TTC says that a near collision between two subway trains last summer that is only being publicly disclosed now appears to have been a case “of human error” but the union that represents workers says that the commission is wrongly trying to “lay the blame” on one of its members.

It happened on Line 1 between Osgoode and St. Andrew stations just after midnight on June 12, 2020.

The Toronto Star, citing an internal presentation given to TTC staff, says that a train was heading north when it had to hold at St. Andrew Station due to a medical emergency.

The newspaper says that a second train that was headed south at Osgoode Station was then directed to unload passengers and switch to the northbound track in order to provide supplementary service.

To do so the operator had to switch to manual control in order to navigate the dead-end section of railway used to connect to the northbound track, known as a “pocket track.”

The Star report says that almost simultaneously, the medical emergency at St. Andrew Station cleared and the other train began to head northbound, putting it on a “collision course” with the train that had just departed Osgoode Station.

The newspaper, citing the internal report, says that the operator couldn’t see the other train approaching from behind as they prepared to merge onto the main northbound track but was able to slam on the brakes after being notified by a guard stationed at the rear of the train.

The TTC believes that the distance between the two trains was less than one to one-and-a-half metres at the time of the near-miss.

“Incidents like this are extremely rare. But like any incident that involves safety at the TTC, it is being treated with the seriousness it warrants – that is why we immediately launched an internal review and called for a third party external review to determine causes and to guide next steps,” TTC spokesperson Stuart Green said in a statement provided to CP24. “Our reviews at this point indicate this was a case of human error while operating in manual mode in a section of the tunnel that was not Automatic Train Control (ATC) activated. The ATC system as a whole remains safe.”

The new $737 million ATC system is still being installed but was in place across much of Line 1 last summer, including the section of track where the near-collision occurred.

The system is supposed to prevent collisions from occurring by detecting where trains are on the track and automatically keeping them at a safe distance from one another.

However, because one of the trains was in manual mode while it attempted to switch tracks it would not have been visible to the system.

Following the incident the TTC took disciplinary action against both the operator of the train and the guard but the union that represents them has filed grievances on their behalf.

Carlos Santos, who is the president of the Amalgamated Transit Workers Local 113, said that he doesn’t believe the near-miss was “human error at all.”

Rather, he says that it underscores the importance of the guard position.

The TTC previously eliminated the guard position on Line 4 in 2016 and intends to eventually do the same along the rest of its subway network.

Santos said that had the guard not been travelling on the vehicle he is confident that there would have been a collision.

He said that the guard and operator were “definitely shaken up” following the incident but were “even more distraught” to be blamed for what happened.

The TTC has conducted a full internal review into the incident and Green said that it has already resulted in 31 corrective actions and recommendations “related to training, communications and operations.”

Of those, 26 are already completed or in progress.

The TTC plans to provide more details about the incident as part of a report that will go to its board in September.