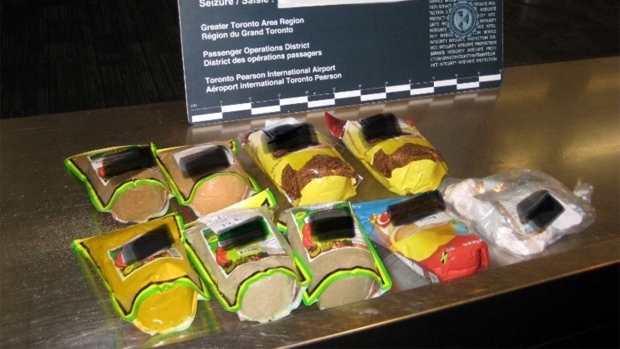 Food packages allegedly used to conceal cocaine are pictured in this image released by the RCMP. (Handout)

The two shipments were seized just days apart from women who were returning from Jamaica.

A woman returning to Canada on one flight was stopped by Canada Border Services Agency (CBSA) officers at Pearson on June 18 and was taken aside for a secondary exam. According to police, 6.6 kilograms of cocaine was found within six food packages during the inspection. The total value of the drugs was estimated to be $825,000, according to the CBSA.

Then on June 23 another woman returning from Jamaica was stopped at Pearson and taken aside for a secondary exam by CBSA officers. After inspecting her belongings, border security officers discovered 3.85 kilograms of cocaine hidden inside of eight food packages, police said. The total value of drugs seized from the second passenger was estimated to be $447,500.

Both women were arrested and turned over to the RCMP.

The Mounties said 76-year-old Mavis Coreta Segree of Etobicoke and 31-year-old Amran Jama of Hamilton have each been charged with importing a substance included in Schedule I (cocaine) contrary to the Controlled Drugs and Substances Act (CDSA).

Both women have since been released on bail.

Segree is set to make a court appearance on Aug. 26 and Jama is set to appear next on Sept. 2.

The RCMP said the arrests were made as a result of “close collaboration” between the RCMP, the CBSA and other law enforcement agencies.

So far this year, more than 184 kilograms of suspected cocaine has been seized in the GTA, police said.