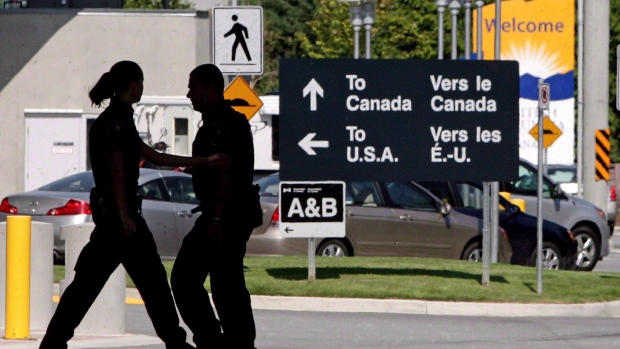 Canadian border guards are silhouetted at an inspection booth at the Douglas border crossing on the Canada-USA border in Surrey, B.C., on August 20, 2009. (THE CANADIAN PRESS/Darryl Dyck)

OTTAWA - A budding cross-border data exchange with the United States is quietly helping Canada crack down on immigration violators.

The federal government has flagged more than 1,000 possible cases of people overstaying their visas or committing other immigration infractions based on information provided by the United States, newly obtained memos show.

Under a 2011 continental security pact, Canada and the United States agreed to set up co-ordinated systems to track the entry and exit information of travellers.

The effort involves exchanging entry information collected from people at the land border -- so that data on entry to one country serves as a record of exit from the other.

Canada says the information will be helpful in everything from tracking known fugitives to responding more effectively to missing-child alerts.

The federal NDP and privacy advocates are watching closely, however, out of concern the data could be used to build invasive personal profiles with little accountability.