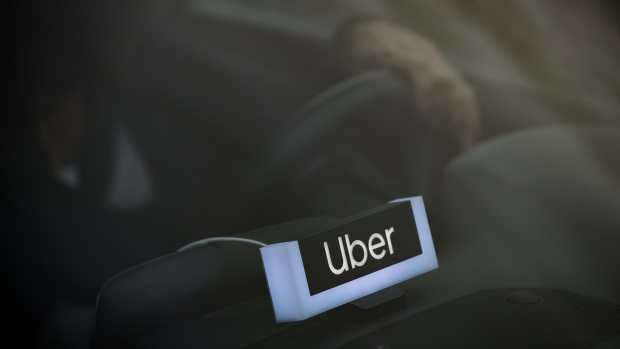 An Uber driver is seen in Vancouver, Friday, Jan. 24, 2020. Uber Technologies Inc. is launching a handful of sustainability measures in Canada to help it reach lofty goals it has set for the market and beyond. THE CANADIAN PRESS/Darryl Dyck

TORONTO - Uber's Canadian ride-hailing and food-delivery business will shift from being based in the Netherlands to Canada - a change that will affect its tax bill.

The San Francisco, Calif. tech giant said the shift in its Canadian operations will come into effect on July 1 and will require Uber to collect sales tax that will be remitted to the government.

The company said the shift will result in no new fees for most restaurants, drivers or couriers, but current fees will be subject to GST, PST and HST and those using its Eats Pass subscription program might also see a sales tax introduced.

The change will allow restaurants, drivers and couriers to claim tax credits and will require them and other users of Uber's apps to sign new agreements with Uber's new Canadian entities.

The company said it has been considering and working toward shifting its Canadian operations from the Netherlands since 2018, and has already made similar moves in the regions of Australia-New Zealand and Europe, Middle East and Africa.

Uber began considering the move after Ontario Uber Eats driver David Heller filed a class-action lawsuit against the company in 2017.

Heller was hoping to get Uber to recognize drivers as employees and provide them with a minimum wage, vacation pay and other protections under the Employment Standards Act.

Uber fought the case and obtained a stay because it had a contract clause requiring all disputes go through mediation in the Netherlands, where it was incorporated.

The case made its way to the Supreme Court of Canada, which sided with the drivers in 2020 and paved the way for the class action lawsuit to seek certification.

Uber eventually amended its dispute resolution protocols to allow arbitration to occur in the province or territory where a driver resides, but Samfiru Tumarkin LLP employment lawyer Samara Belitzky said Uber's new agreements still have some legal clauses that may trip up unsuspecting drivers.

Belitzky, who is part of the Samfiru Tumarkin LLP firm pursing the class action, said the new contract drivers are being sent asks them to agree not to pursue class or collective action against Uber -- a clause that was in their previous agreement too.

Uber wants drivers to agree to settle their issues through arbitration or on an individual basis instead, but offers instructions on how to opt out of that clause, Belitzky said.

“The opt out information is right at the end...and it's in a lot of legalese, so most Uber drivers, they don't even see it,” said Belitzky.

“They don't realize that their rights are being impacted.”

She recommends anyone being asked to sign the new agreement read it carefully.

The company, which began alerting its users to the changes on Wednesday, is also hosting support lines and tax resources for anyone with questions.