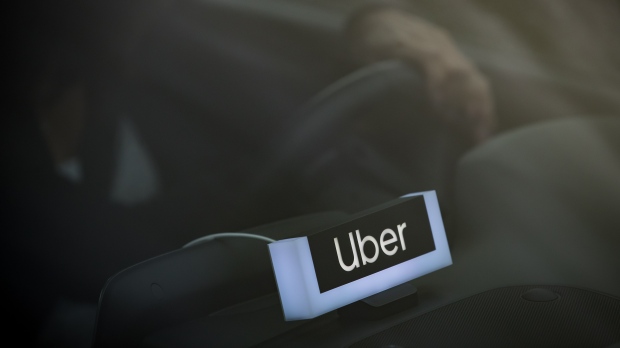 An Uber driver is seen in Vancouver, Friday, Jan. 24, 2020. THE CANADIAN PRESS/Darryl Dyck

TORONTO - Uber Technologies Inc. is launching a handful of sustainability measures in Canada in an effort to reach lofty goals it has set for lowering greenhouse gas emissions.

The San Francisco-based ride-hailing giant said Tuesday that it will encourage the use of electric and hybrid vehicles by offering rewards and savings for riders and earnings for drivers who use them and allocating $800 million in resources to the cause.

The company said its new and targeted approach to sustainability will help it reach two goals it has set: getting 100 per cent of rides in Canada, the U.S. and Europe completed on battery EVs by 2030 and ensuring all trips on the platform globally are emission-free by 2040.

Uber's commitments come as the ride-hailing business has slumped in several markets during the COVID-19 pandemic, but global attention around climate change has not dissipated.

“We want to take this opportunity to do more, to do better and to do our part to drive the green recovery in our cities,” said Dara Khosrowshahi, Uber's chief executive, in a media briefing Tuesday.

“Uber has a clear responsibility to reduce our environmental impact and today we are committing to ... tackle the climate crisis more aggressively than ever before.”

When two-thirds of the world's population was under lockdown in early April, carbon emissions fell 17 per compared with last year, but by June, the drop was only five per cent, Khosrowshahi said.

“Carbon emissions will return to normal soon,” he warned.

Canada has committed to eliminating 200 million tonnes of greenhouse gases by 2030 under the Paris climate change agreement. Studies have showed that COVID-19 measures have so far pushed the country's emissions down 20 per cent.

Uber said the pandemic has hastened its climate change efforts, which include Uber Green, a service offering electric and hybrid vehicle rides.

It will operate in more than 30 cities this year, including Toronto, Vancouver, Waterloo and Ottawa.

The service will use geofencing technology and focus on busy commuting hours and dense areas of cities to ensure the availability of Green rides.

Through the service, riders will be charged an extra $1 per ride. Half that surcharge will be given to the driver and the other half will flow to the Green Future program, which hopes to help drivers transition to EVs.

Uber will entice consumers by giving them three times the rewards points - eventually coming to Canada - for every Green trip taken.

Rewards can be used for discounts on rides or meals or donated to charities.

The company will also try to convince drivers to adopt more environmentally friendly vehicles by offering an extra 50 cents per Green ride to hybrid or EV drivers, $1 per trip for zero-emission vehicle owners and $1.50 for each Green ride for battery EV drivers.

It is committing $800 million in resources to help drivers transition to EVs by 2025 and partnering with auto companies like General Motors in the U.S. and Canada and Renault-Nissan across European cities to offer savings to those who make the switch.

Uber will also release climate assessment and performance reports detailing emissions stemming from trips on the platform in Canada and the U.S.

Its first climate report, released Tuesday, found Uber hosted 4 billion rides across the two markets from 2017 to 2019, but said that the current state of transportation is “unsustainable.”

Transportation emissions have grown faster than any other end-use sector over the last three decades and CO2 emissions from the industry account for nearly one-quarter of the global total, Uber said.

This report by The Canadian Press was first published Sept. 8, 2020.