In the video, a man is seen speaking to a group of construction workers, telling them that if they feel unsafe, they have a choice to walk out.

The man then proceeded to tell the group that social distancing is not being observed on sites, and proper hygiene is not being practiced.

"We're all breathing on each other. Where's your eating facilities? Are they sanitized? Do you have water to wash your hands when you eat your sandwiches," he said.

The man was later identified as Jack Da Silva, a member of the Laborer's International Union of North America (LiUNA) Local 183.

The video comes days after the province listed most construction as an essential service, meaning construction workers have to continue working even as most other industries have been forced to work at home.

Public health agencies have strongly urged the public to limit social interactions and banned large gatherings to stop the spread of the virus, which has killed 13 people in Ontario as of Wednesday.

In Quebec on Monday, Premier Francois Legault suspended all construction activity except for emergency or security services.

Following the news of three Crosstown LRT construction workers testing positive for the virus, Del Duca said there needs to be a "stronger action on the part of the government." 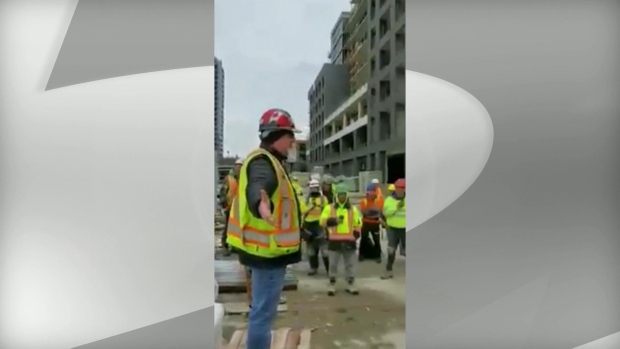 In a news conference on Wednesday, Premier Doug Ford reiterated that if construction workers don't feel safe at their workplace, they can walk off the job.

There are 125 inspectors in Toronto checking if sites are adhering to guidelines from public health, he said, adding that 12 summonses were written Wednesday.

If workers end up choosing to walk off the job, Ford said he is "positive" they will be able to collect payment from the federal government.

"What I understand (from) the federal government if you can't work because of coronavirus, there will be a package out there. There is a package right now, and safety is our number one priority."

Sean McFarling of LIUNA Ontario Provincial District Council said that if the province and health officials are labelling construction as an essential service, then employers need to make their workplace safe for employees.

"I think that video we watched reflects the fears and concerns that we're also hearing from our members in emails and various calls. You've got the fear for their health about being on unsafe worksites and then the fear of their own economic wellbeing if they're not able to go to work," McFarling said.

He said he is pleased to learn that the province is listening to unions to ensure that inspectors are going to sites demanding that safe conditions should exist if they are required to go to work.

McFarling said there should be adequate hand sanitation at construction sites, more room to have lunch apart, and sufficient tools to avoid sharing. He also said social distancing could be observed by doing staggered shifts to allow a smaller crew on sites.

"This is going to require a sacrifice in a certain amount of efficiency, but we will not sacrifice our member's safety to have an efficient workplace. So if they need to be on the sites, employers need to take a hard look at all the various extra steps that are going to be taken to protect our workers," McFarling said.

"Our members shouldn't have to choose between economic security and physical health."

Richard Lyall, executive director of the Residential Construction Council of Ontario (RESCON), said the first thing his association did in response to the virus outbreak was to address the safety issue at construction sites.

"We got together with the other sectors of the construction industry, and we developed an entirely new protocol to address safety measures on sites," Lyall said.

He said the video of Da Silva was "over the top" and unhelpful.

"And that performance by the rep was more theatre than useful in any real way. In fact, I perceived that as more of a hazard than anything else to go onto a site and scare people," Lyall said.

He said it is unfortunate that the video was released because it adds to the fear-mongering that's been happening. Lyall said there had been some problems, including some pilferage of supplies like missing hand sanitizers. But, they are being replaced.

Lyall repeated the premier's sentiments, saying if a worker does not feel safe, they don't have to work.

"Construction workers are very smart to people. They know their rights."