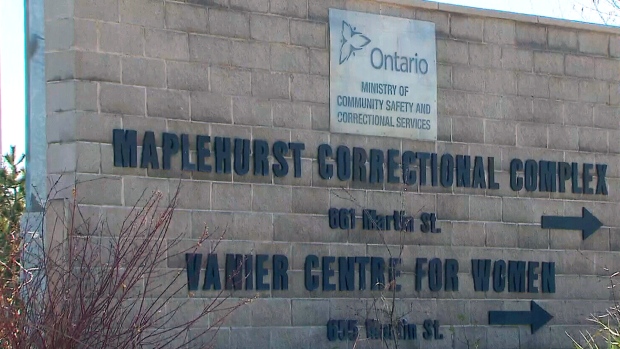 The exterior of Maplehurst Correctional facility is seen.

Unvaccinated staff at a correctional facility in Milton have been placed on unpaid leave after Halton Public Health issued an order that barred them from working.

In a statement sent to CP24 Sunday afternoon, the Ministry of the Solicitor General said it complies with the Section 22 order issued in response to the growing outbreak at Maplehurst Correctional Complex.

“As part of the order, the local public health unit has declared that all unvaccinated staff will not be permitted onsite after noon on December 1,” ministry spokesperson Greg Flood said in the statement.

“As the public health order does not permit staff to attend work, all unvaccinated employees, including those who refuse to disclose their vaccination status, have been placed on temporary unpaid leave pending the lifting of the local public health unit’s orders.”

It is not known how many staff members at Maplehurst Correctional Complex have been put on leave.

Ontario Public Service (OPS) employees, which include prison staff, are required to be fully vaccinated or submit to an education session and complete regular antigen testing. The ministry said those who refuse to comply with the directive may be suspended without pay and subject to further disciplinary action, including dismissal.

“Doing so would create operational issues, could compromise our ability to ensure the institution is adequately staffed during this challenging period.”

In a statement sent to CP24, OPSEU Local 234 President Peter Figliola, whose union represents correctional workers at the facility, said the number of staff affected by the Section 22 order is between 100 and 120.

It includes workers from the Ontario Correctional Institute who were moved to Maplehurst Correctional Complex after the Brampton facility was temporarily closed due to an outbreak.

Figliola said all workers at the Milton facility are following OPS' vaccine-or-test policy. He accused the employer of changing "the prerequisites for qualifying for COVID Paid Leave the day before staff were put on unpaid leave."

"Other law enforcement agencies have, in fact, put vaccine mandates in place, and whether they were supported or not, those employees were at least given timelines and a deadline. That never happened here. Correctional workers in Ontario are following the rules and directives that were issued to them and are now being punished for doing so. It's wrong on so many levels," Figliola said.

"The Section 22 order issued by Halton Public Health prevents unattested staff from entering the facility, it does not state that these staff should spend the length of this latest outbreak without a paycheck."

The issue is not about vaccination status, Figliola said, but how workers are being penalized "for a choice they were afforded by the employer."

"If it was the employer's intention to have all staff working in provincial facilities vaccinated, a mandate should have been put in place. It was not."

According to the COVID-19 data from the ministry, active inmate cases at the correctional facility grew from four on Nov. 25 to 36 four days later.

It is unknown how many cases are among staff.

In January, an outbreak at Maplehurst saw more than 100 inmates infected with COVID-19.

A total of 265 inmates had tested positive for the virus since the start of the pandemic.