The UP Express is back up and running following a signal issue that resulted in an hours-long suspension of service on Friday morning.

Service was first halted just before 5 a.m. and didn’t resume until around 11:30 a.m.

During the disruption, GO shuttle buses were made available to those who were travelling to and from Union Station and Pearson Airport.

Anyone who uses the UP Express for non-airport travel, meanwhile, were urged to consider taking the TTC at Bloor or Weston stations.

“We are looking at what we call a bus-bridge service from Pearson to Union. That means that we will still be able to mirror service every 15 minutes,” Metrolinx spokesperson Nitish Bissonauth told CP24 on Friday morning. “We have staff on scene and on site that will be directing customers.” 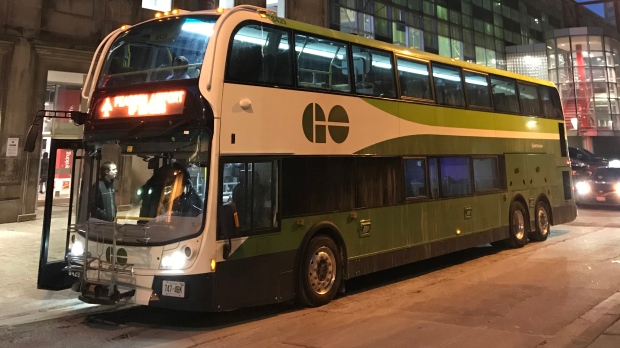 At around 6:30 a.m., GO Transit also reported delays on the Lakeshore West and Lakeshore East lines due to signal issues.

It is not clear what caused the signal problem.

“Crews are working as fast as we can. It was a bitter cold morning and we do understand that. Their job is even more challenging,” Bissonauth said earlier in the day. “We are still not too sure what the cause is at this point in time.”

Metrolinx spokesperson Anne Marie Aikins provided an update on Twitter at around 8:30 a.m., confirming that the problem is a "bigger issue" than they had previously thought.

"We've engaged more crews to conduct a full repair," she wrote, adding that it may take a few more hours before service is restored.

The signal problem is a bigger issue then we’d hoped for so we’ve engaged more crews to conduct a full repair. May take a few more hours unfortunately. Bus bridge is operating well given lower traffic with holiday weekend. Thank you for your patience. We are very sorry https://t.co/bQA5ci41wE