Up, up, up: Canada house prices poised to surge again despite central bank warning 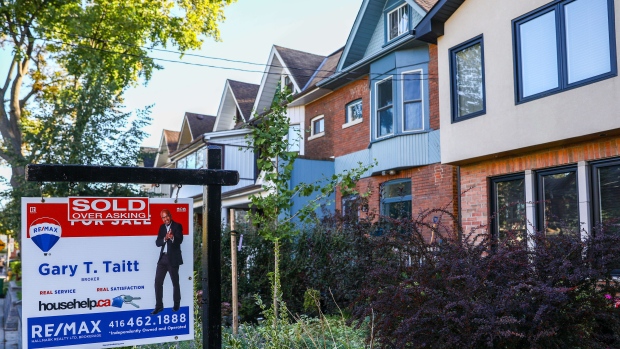 A sold sign is displayed in front of a house in the Riverdale area of Toronto on Wednesday, September 29, 2021. THE CANADIAN PRESS/Evan Buhler

OTTAWA, Nov 24 (Reuters) - Canadian housing prices are set to surge again in the coming months as investors and first-time buyers scramble to buy before interest rates go up, ignoring a warning from the Bank of Canada that there is a high risk of a sudden price drop.

Central bank Deputy Governor Paul Beaudry told would-be home buyers on Tuesday to consider if it is a "good time to buy or not," pointing to market frothiness in certain cities and renewed investor activity.

Those conditions could "expose the market to a higher chance of a correction," he said.

The Bank of Canada last month signaled the overnight rate, currently at a record low 0.25%, could start rising in the "middle quarters" of 2022. Another rush to buy is probably already under way, analysts said.

"Whenever interest rates start rising, people get into the market, including investors. So you will see an acceleration in activity over the next few months," said Benjamin Tal, deputy chief economist at CIBC Capital Markets.

Canadian house prices skyrocketed 31.6% year-over-year in March to hit a record high before softening a bit over the summer. Prices are now accelerating again, with October's average price barely below the March peak.

Canadian Prime Minister Justin Trudeau has pledged to act on the runaway market, but critics note prices have climbed 77% nationwide since he took office in 2015.

Toronto mortgage broker Ron Butler says he is getting busier by the hour with clients desperate to get into the market.

"We see it, literally, hourly here ... people who have simply given up and say: 'The prices are going to go up forever, I have to buy now,'" he said.

Butler said he is working with one longtime Toronto renter who has been waiting years for prices to fall so he could get into the market. Now he is buying an hour's drive west in Hamilton because he is worried he will never own a home otherwise.

Fear "is not a good motivator when you're buying a house," said Butler, adding that investors too are increasingly gripped by the "fear of missing out," or FOMO.

Butler estimates that investors - those who buy properties to rent out or to hold for speculative gains - make up about 25% of housing demand at this point, with that number far higher in major cities and particularly in pre-sale condo markets.

The Bank of Canada said investor buying has doubled since the onset of the COVID-19 pandemic, but economists see demand holding up.

"We don't expect a collapse. But we see prices being close to flat next year," said Jimmy Jean, chief economist at Desjardins Group in Montreal, adding that demand is expected to remain "pretty decent," pointing to strong immigration.

Doug Porter, chief economist at BMO Capital Markets, also expects a short-term "rush to beat rate hikes," but then only a moderate pullback in markets that were supercharged by the pandemic.

"The history of the last 15 years has been cluttered with those calling for a crash in the Canadian housing market to be proved wrong time and time again," Porter said.