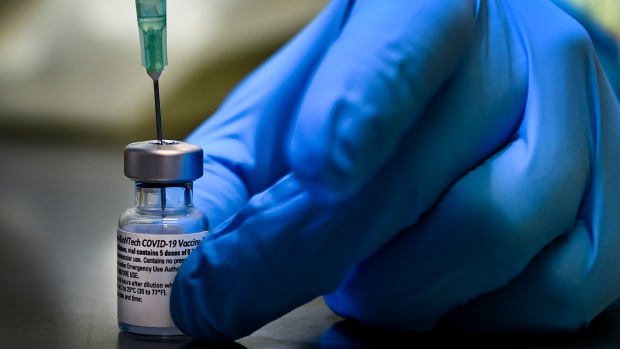 A national panel of vaccine experts recommended Wednesday that provinces extend the interval between the two doses of a COVID-19 shot to quickly inoculate more people, as the prime minister expressed optimism that vaccination timelines could be sped up.

In laying out its new guidelines, the National Advisory Committee on Immunization said extending the dose interval to four months would create opportunities to protect the entire adult population against the virus within a short time frame.

As many as 80 per cent of Canadians over 16 could receive a single dose by the end of June simply with the expected supply of Pfizer-BioNTech and Moderna vaccines, the panel said. Second doses would begin to be administered in July as more shipments arrive, the panel said, noting that 55 million doses are expected to be delivered in the third quarter of the year.

In comparison, the federal government previously said 38 per cent of people would receive two doses by the end of June.

The addition of the newly approved Oxford-AstraZeneca vaccine to the country's supply could mean almost all Canadians would get their first shot in that time frame, but Ottawa has not yet said how many doses of that vaccine will be delivered in the spring and how many in the summer.

“The vaccine effectiveness of the first dose will be monitored closely and the decision to delay the second dose will be continuously assessed based on surveillance and effectiveness data and post-implementation study designs,” the panel wrote.

“Effectiveness against variants of concern will also be monitored closely, and recommendations may need to be revised,” it said, adding there is currently no evidence that a longer interval will affect the emergence of the variants.

The updated guidance applies to all COVID-19 vaccines currently approved for use in Canada.

The committee's recommendation came hours after Newfoundland and Labrador said it will extend the interval between the first and second doses to four months, and days after health officials in British Columbia announced they were doing so.

Alberta, Manitoba and Quebec also said Wednesday they will delay second doses. Ontario previously said it was weighing a similar move but would seek advice from the federal government.

Earlier Wednesday, Prime Minister Justin Trudeau said any change in public health guidance regarding the timing of the two doses could affect the speed of Canada's vaccine rollout, as could the approval of more shots.

The federal government's plan to have doses administered to all Canadians who want one by the end of September didn't factor in the arrival of new vaccines such as the Oxford-AstraZeneca shot, Trudeau said.

And despite delays in the delivery of the Pfizer-BioNTech vaccine last month, Canada is now “fully back on track and even ahead of schedule” when it comes to its supply of the various shots, he said, noting the country should receive more than the six million doses of COVID-19 vaccines it initially expected to get by the end of March.

“The projections we've had for many, many months certainly hold, but we're also very optimistic that they're going to be able to be moved forward if, indeed, all the vaccines that we've contracted for are able to be manufactured and shipped in the right ways,” the prime minister said.

The first 500,000 doses of the recently approved Oxford-AstraZeneca vaccine arrived in Canada on Wednesday, though confusion persists over who should get them.

The vaccine, manufactured at the Serum Institute of India, is the third COVID-19 shot approved for use in Canada.

Health Canada last week authorized its use for all adult Canadians but the National Advisory Committee on Immunization recommended Tuesday that it not be administered to people 65 years of age or older.

The committee said there is limited data from clinical trials about how effective the Oxford-AstraZeneca vaccine is for seniors and recommends that they be given priority for the two other vaccines - Pfizer-BioNTech and Moderna - already greenlighted for use in Canada.

Both Health Canada and the committee stress no safety concerns have arisen in the clinical studies or among the millions of seniors who have received the Oxford-AstraZeneca vaccine in other countries.

Some provinces, including Alberta, British Columbia and Prince Edward Island, plan to follow the advisory committee's advice and target the Oxford-AstraZeneca vaccine at younger people working in front-line essential services or in high-risk settings like prisons.

On Wednesday, the Ontario government said it will give the Oxford-AstraZeneca shot to residents aged 60 to 64. The drug will not be doled out through mass immunization clinics but rather through a “different pathway,” Solicitor General Sylvia Jones said. Details of the program were not released.

Manitoba said it plans to target those between the ages of 50 and 64 who have high-risk underlying conditions. The province said it expects to receive its first shipment of the AstraZeneca shot by mid-month.

Other provinces, including Quebec, New Brunswick and Nova Scotia, are still mulling over the issue.

Meanwhile, Quebec said it would move more regions into the less restrictive orange level of its pandemic system starting next Monday. But while residents in Quebec City, Chaudiere-Appalaches, Mauricie, Estrie and Centre-du-Quebec will see measures loosen, those in the Montreal area will remain under the more stringent rules of the province's red level.

New guidelines for shipping and storing the Pfizer-BioNTech vaccine were also released Wednesday, with Health Canada saying the drug can be transported and kept at standard freezer temperatures for up to two weeks.

The previous storage instructions required that the vaccine be kept in ultralow temperatures and thawed just before use, which restricted its distribution to areas equipped with the necessary specialty freezers. The change should allow for wider distribution of the vaccines.

Ottawa also confirmed Wednesday it is extending three federal support programs meant to lessen the economic impact of COVID-19 on residents and business owners until June.

The federal wage subsidy, rent support and lockdown programs will carry on with the same level of aid, the government said.

In addition to Wednesday's shipment of Oxford-AstraZeneca doses, Canada is also scheduled to receive 444,600 doses of the Pfizer vaccine this week.

With Oxford-AstraZeneca added to Canada's vaccine arsenal, the country is on track to receive a total of 6.5 million vaccine doses by the end of this month - half a million more than originally expected.

-with files from Mia Rabson in Ottawa