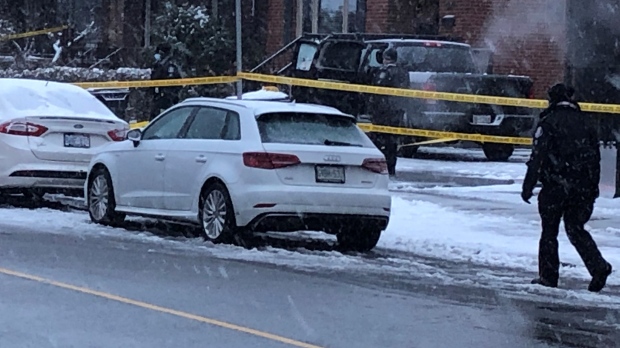 Police tape is shown at the scene of a homicide investigation on Dufferin Street south of Lawrence Avenue on Tuesday afternoon. (Sean MacInnes)

The victim in a brazen daylight shooting in the city’s Glen Park neighbourhood has been identified as a 19-year-old Markham man.

Police say that Trong (Daniel) Phan and a woman were sitting in a black pickup truck in a parking lot on Dufferin Street at Glencairn Avenue at around 3:30 p.m. on Tuesday when a grey hatchback pulled alongside them and opened fire.

Both Phan and the woman were struck by gunfire as a result.

Police say that Phan was pronounced dead on scene while the woman was rushed to hospital, where she remains in life-threatening condition.

Few details have been released about suspect so far, though police did tell reporters on Tuesday that they were looking for a man who was wearing a grey tracksuit.

They also said that the suspect vehicle was last seen fleeing the scene eastbound on Glen Park Avenue.