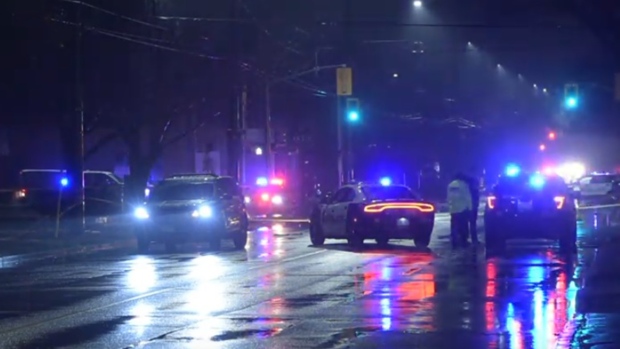 Police are seen on Upper Wellington Street in Hamilton on Jan. 12, 2020 after a fatal hit-and-run. (Andrew Collins)

A man who was killed in a hit-and-run on Hamilton Mountain over the weekend was seen lying on the roadway moments before the collision, police say.

Emergency crews were called to the Upper Wellington Street and Inverness Avenue area at around 12:30 a.m. on Sunday for reports of a pedestrian who had been struck by a vehicle.

The pedestrian was found without vital signs at the scene and was pronounced dead by paramedics.

In a news release issued on Wednesday, police said that they have since determined that the “deceased was laying on the road moments before the collision.”

Police also released brief descriptions of two vehicles that they said were seen travelling southbound on Upper Wellington Street immediately prior to the collision.

Police say that they are continuing to appeal to anyone who was in the area of Upper Wellington Street and Inverness Avenue shortly before 12:30 a.m. on Sunday to come forward.