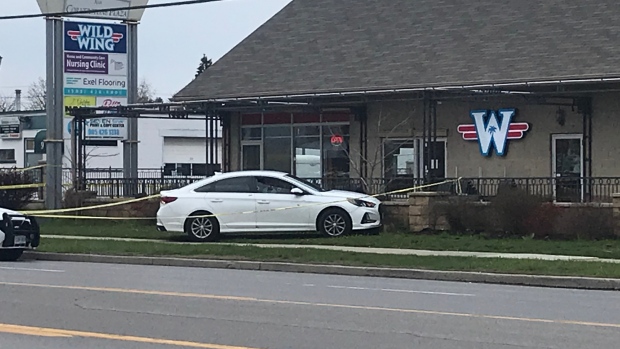 A vehicle is shown riddled with bullet holes following a shooting in Ajax on Wednesday afternoon. (Craig Wadman)

Police say that two people who were injured during a brazen shooting in Ajax on Wednesday afternoon are now listed in serious condition in hospital after initially being transported with what were described as life-threatening injuries.

The shooting occurred near Kingston Road and Harwood Avenue sometime after 4 p.m.

Police have said that the occupants of two vehicles were in the intersection when shots rang out. More than 45 shell casings were found on scene.

In an interview with CP24 on Thursday, Const. George Tudos said that a 24-year-old woman and a 26-year-old that were in a white sedan both sustained gunshot wounds. He said that they exited the vehicle in the intersection before it rolled southbound, mounted a curb and ended up pushed up against a restaurant patio. Footage from the scene showed dozens of bullet holes in the vehicle’s rear windshield and along its passenger side doors.

“Speaking with investigators, they confirmed this is not a random act,” Tudos said. “There is more to this, however it is still early in the investigation and we are still trying to determine exactly who the suspects are and why this took place. It is still all under investigation.”

Tudos said that police have already spoken to a number of witnesses but are looking to speak with anyone else who was in the area and may have left prior to the arrival of police.

He said that forensic investigators are also trying to determine how many guns may have been used in the shooting by examining the shell casings collected from the scene.

“They will try to figure out how many different calibres were involved, how many guns hopefully and we can at that point determine exactly how it happened, whether it was an exchange of gunfire or it was just coming from one vehicle,” he said.

Police have not released any description of the suspect vehicle at this point.