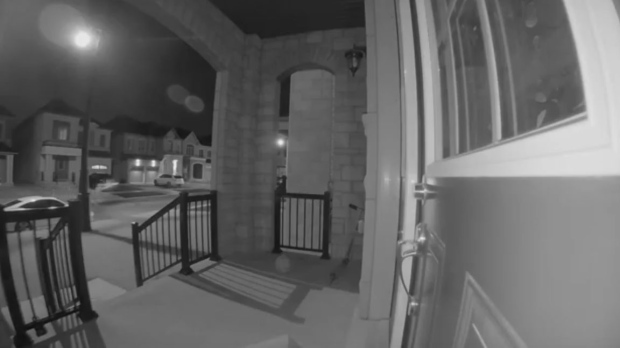 York Regional Police have released video surveillance footage of suspects firing dozens of shots outside a Vaughan home that was being rented out for party on Halloween night.

Officers were called to Cannes Avenue, located near Pine Valley and Major Mackenzie drives, at around 2 a.m. on Friday for a reported shooting.

Police allege that multiple people began shooting on the street outside a home “being used as a short-term rental” for a party.

A portion of the incident was captured on a neighbouring home’s security camera and showed two men exit a white, four-door sedan, run down the street, and fire more than 20 shots at an unseen target.

In the video, a third man is seen getting out of the vehicle from the passenger’s side and hopping into the driver’s seat.

Following the exchange of gunfire, all three men took off in the vehicle.

“It’s amazing that no one was injured or killed given the number of shots that were recklessly fired in this otherwise quiet neighbourhood,” York Regional Police Chief Eric Jolliffe said in a written statement.

“We continue to see that there are people using short-term rental houses for parties and their guests are bringing handguns and violence into York Region. Those choosing to illegally use guns will be prosecuted to the full extent of the law.”

Anyone with information about the incident is asked to contact police or Crime Stoppers anonymously.