Video has emerged showing a worker dangling in the air above a Toronto construction site after accidently getting entangled in a tagline attached to a crane.

A 38-second video, uploaded to Instagram, shows the worker clinging to a rope while he hangs several storeys high.

"Hang on, just let your hardhat fall, bro," a person can be heard yelling at the worker in the video.

The video does not show the worker safely get to the ground, but the company confirmed the person was lowered and was not seriously injured.

The company said they are working with “all appropriate authorities” and the incident is being investigated. 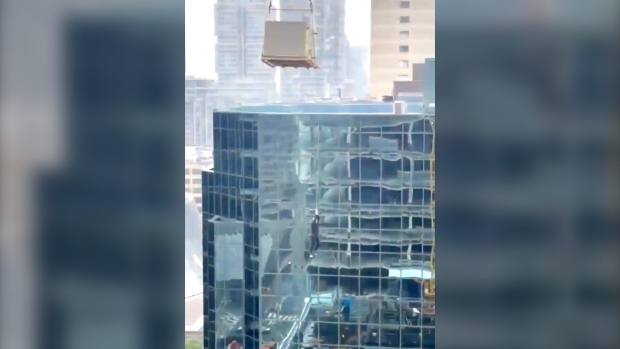 Video of the incident was posted to Instagram on Wednesday by My S1, a company that advocates for workplace safety.

President of My S1, Phillip Ferreira, told CTV News Toronto he was sent the video by an employee, who wishes to remain anonymous, that was on the job site when the incident occurred.