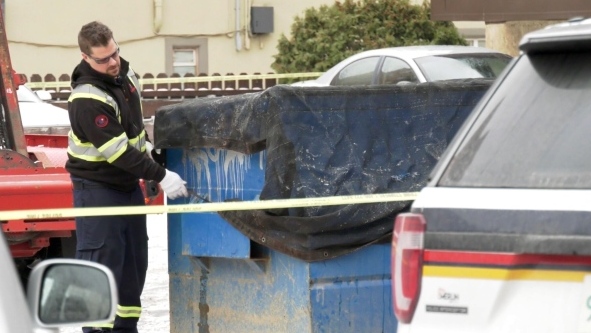 Saskatoon police were seen blocking off a dumpster in the 400 block of 5th Avenue North on Nov. 8 2019.

SASKATOON - Though they don't yet know the identity of the infant found dead in a Saskatoon recycling bin, some city residents planned to honour the child at a vigil late Saturday.

Mario Fiddler already held a vigil for the baby on Friday night, posting on Facebook that he and a friend who found the child held a smudge ceremony and lit candles.

Fiddler then issued a call for others to join another gathering late Saturday afternoon in the alley where the baby was discovered a day earlier in the industrial recycling bin.

Police have not issued any updates on their investigation, but said Friday that officers would talk to hospitals to see if they had come across a mom who had recently given birth and didn't have a baby with her.

They did not say whether the baby was a boy or a girl, although they said evidence suggested the infant was a newborn and it's believed the birth took place at another location.

Police haven't said how the baby was found, but condominium manager Stan Bergen told CKOM radio that he was approached by a man asking to use his phone on Friday morning because the man believed he saw a baby in the recycling bin.

“So we went out there and I looked in the dumpster, and there was this little baby,” Bergen said. “I was surprised and didn't know what to think. I was totally surprised by that.”

When Bergen called 911, he said even the dispatcher sounded surprised.

Police spokeswoman Alyson Edwards said Frdiay it was important that the mother be located, noting she's “obviously in a great deal of distress.”

An autopsy to determine the cause of death is set for Tuesday.