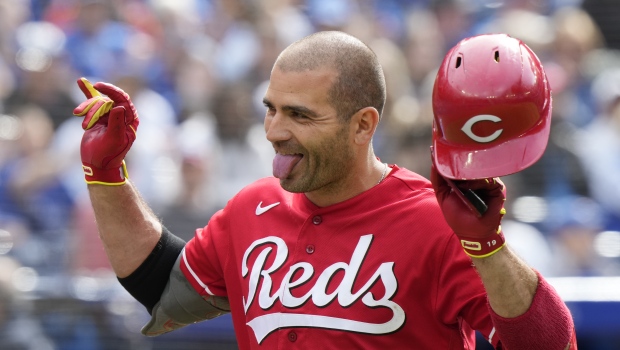 Canadian Joey Votto smashed a towering eighth-inning home run off the right-field foul pole to give the Cincinnati Reds a 3-2 win over the Toronto Blue Jays on Sunday.

With the game tied at 2-2, the 38-year-old Votto, a Toronto native, hit a one-out, 2-0 curveball down the line off Blue Jays right-handed reliever Yimi Garcia (0-3).

The blast was Votto's first of the year. The six-time all-star first baseman was activated from the COVID-19 injury list before the series opener Friday.

He finished the series 3-for-11 with a first-inning walk in the finale. Votto has made 12 career visits to Toronto and has 11 hits in 44 plate appearances, including four homers.

Reds closer Art Warren enjoyed a 1-2-3 ninth inning for his second save. Cincinnati reliever Alexis Diaz (2-0) picked up the win for his two innings of work.

Toronto starter Yusei Kikuchi struggled in the first. He faced eight batters and threw 37 pitches as Cincinnati grabbed a 2-0 lead.

Kikuchi walked three of the first four batters he faced to load the bases. Aristides Aquino then smacked a two-out, ground-rule double down the left-field line.

Kikuchi settled down to retire 10 in a row until Reds catcher Aramis Garcia led off the fifth with a single to left field.

Toronto pulled to within 2-1 in the second because of a leadoff double from Santiago Espinal and a run-scoring single to right field from Matt Chapman.

The Blue Jays tied the game in the third. A pitch hit George Springer on his left elbow. He moved to second on a wild pitch and took third base on Vladimir Guerrero's long fly ball to centre.

Springer made a fine running catch in the right-centre gap on a shot hit by Farmer in the sixth.

NEXT UP -- The Blue Jays begin a two-game set in St. Louis against the Cardinals (23-18) on Monday, the first of six straight on the road. Toronto right-hander Jose Berrios (3-2) will face fellow right-hander Miles Mikolas (3-2) in the series opener. Berrios stopped a two-game personal losing streak in his last outing with a 3-0 shutout victory against the Seattle Mariners last Tuesday.

This report by The Canadian Press was first published May 22, 2022.