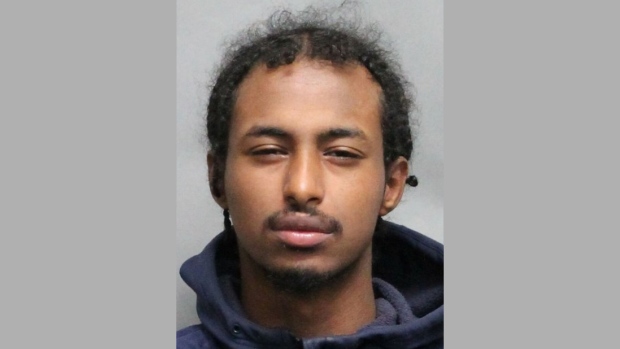 Mohamed Hassan Is pictured in this handout photo released by Toronto police.

Toronto police have issued a second Canada-wide warrant in connection with the drive-by killing of a 21-year-old man in Etobicoke earlier this month.

The shooting took place on April 3 at around 5:40 p.m. in the area of Dixon and Scarlett roads.

According to police, two men were in a vehicle that was northbound on Scarlett Road when another vehicle drove up beside them and the occupants began shooting.

The victims’ vehicle was struck by multiple bullets, police said.

The suspects then crashed their vehicle into another vehicle at the corner of the intersection before fleeing the scene on foot. The victims drove to another location and called 911.

Emergency crews arrived and found two young men suffering from gunshot wounds. Both were transported to hospital, where one of them was pronounced dead.

Police have identified the man who died as 21-year-old Habil Abdilahi Hassan of Toronto.

Police announced Monday evening that they have now issued a Canada-wide warrant for 20-year-old Mohamed Hassan of Toronto.

He is wanted for first-degree murder and attempted murder. Police say he is considered armed and dangerous and they're asking anyone who spots him to contact investigators.

Mohamed Hassan is the second suspect identified by police in the case.

On April 8, police announced that they had issued a Canada-wide warrant for 18-year-old Antwan Triston James of Toronto. James is also wanted for first-degree murder and attempted murder and is considered armed and dangerous.

Police said Monday that they continue to urge any witnesses who were in the area at the time of the shooting to contact investigators.

Habil Abdilahi Hassan, 21, is seen in a police handout image.