Wayne Gretzky remembers his father, Walter, as man with 'a heart of gold' at funeral

BRANTFORD, Ont. - Walter Gretzky's family thought the end was coming quickly in the middle of February.

The father of hockey's greatest player had suffered a serious hip injury, and after battling Parkinson's disease and other health issues in recent years, his time - something Walter was always willing to give both friends and strangers - appeared to be running short.

“But he had a love for life and he didn't want to leave,” Wayne Gretzky said during an emotional eulogy Saturday. “We were 21 days sitting with him and just enjoying life.

“We got a chance and opportunity to tell stories.”

And Walter Gretzky's life was full of them.

Known as Canada's hockey dad, Walter Gretzky died Thursday at age 82. His passing prompted an avalanche of tributes for a genuine, approachable, authentic person who nurtured Wayne's incredible talents on the family's famed backyard rink in Brantford, but also never forgot where he came from.

“He was a remarkable man who loved life, loved family,” Wayne Gretzky said. “We'd be a way better world if there was so many more people like my dad. 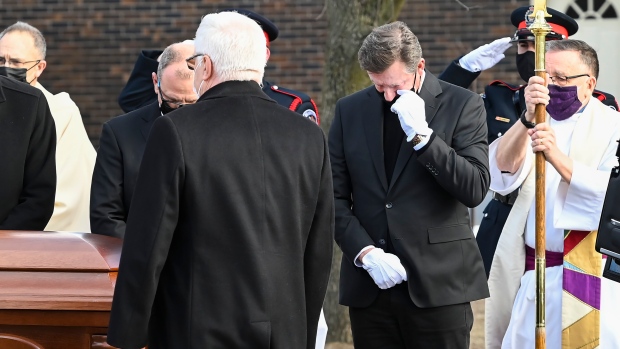 Due to COVID-19 restrictions, the funeral service was limited to family. But hundreds of people - including many kids wearing Gretzky jerseys - gathered outside St. Mark's Anglican Church in this city about 100 kilometres west of Toronto.

“A tough time,” said Wayne, his voice beginning to crack and tears welling in his eyes. “I'm so proud of the fact that so many people have reached out and given him such great tributes, because he deserves it.

“He has the heart of gold.”

Walter was there every step of the way as Wayne ascended to a greatness that included four Stanley Cups with the Edmonton Oilers and becoming the NHL's all-time leader in goals, assists and points.

An employee with Bell for more than three decades - and long after his son became the sport's biggest star - Walter remained a loving, blue-caller symbol of devotion.

“A deeply humble man,” said Rev. Dr. Tim Dobbin, who officiated the funeral broadcast live on TSN and streamed on Sportsnet.ca. “He spoke the truth. Wally's word was his bond.”

The elder Gretzky stayed out of the limelight at first during Wayne's rise, but especially after suffering a brain aneurysm in 1991 that cost him much of his memory. Still, Walter became a household name on par with the Great One.

The son of a Polish mother and Russian father, Walter played minor hockey and junior B, but said later in life he was never good enough to make it professionally.

“He came here, his family, as an immigrant,” Wayne said. “They came here because they wanted a better life.

“I don't think I've ever met a prouder Canadian than my dad.”

Walter Gretzky is survived by his five children - Wayne, Kim, Keith, Glen and Brent - as well as numerous grandchildren and great-grandchildren. Phyliss, his wife of 45 years, died of lung cancer in 2005 at age 64.

“My sister (Kim) was a champ,” Wayne, who stressed his father's death wasn't related to the coronavirus, said of Walter's final weeks. “She was beside him each and every minute of the day. The grandkids were wonderful.

Wayne told a couple of stories during his remarks, including how Walter would have his grandchildren collect stray golf balls at a local course for him to autograph for kids.

“You guys have to stop grabbing golf balls,” Wayne recounted telling them.

They were confused. It was under Walter's orders.

“I know he wants them for the kids,” Wayne said he replied. “But I've got to sign them!”

The eldest Gretzky child also shared another family tale about how Walter missed the birth of his youngest, Brent, for one of Wayne's hockey tournaments.

“My mom said, 'Walter, we're going to have this baby this weekend,”' Wayne recalled. “And he said, 'It's OK, you can wait until we get back.”'

Wayne then added with a smirk: “So, Brent was born on the Saturday.”

Once father and son arrived home in Brantford, family and neighbours were wondering what Walter had been thinking before one final comment pushed him over the edge.

“He was so mad,” Wayne said. “He stood and he grabbed the trophy and he goes, 'Yes, but we got the trophy!”' 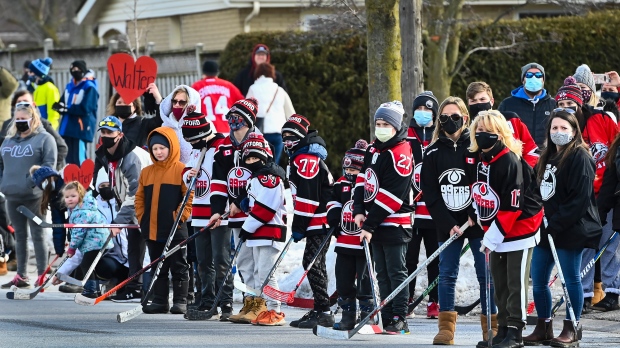 A video tribute towards the end of Saturday's service included pictures from the early days on the backyard rink, Wayne's triumphs, Walter on the ice teaching kids, the Gretzky memorabilia in the family home, and highlights from his son's final games in the NHL.

As the casket was about to be led out of the church and into the sunshine, “The Hockey Theme” song made famous on “Hockey Night In Canada” was played.

And the moment Walter's funeral procession pulled away from the church - the building's sign read “We Will Miss You Wally” - some of the jersey-clad kids waiting outside tapped their hockey sticks on the pavement in unison.

A fitting send off for Canada's hockey dad.