'We all will grieve for that child,' Blair says of boy, 3, who died in the cold

A three-year-old boy has died after he was found outside in frigid temperatures hours after wandering away from a North York apartment.

Elijah Marsh was found without vital signs Thursday morning about 300 metres from a Lawrence Manor apartment building where he was staying.

He was located by a volunteer search party in the backyard of a house on Baycrest Avenue in the Bathurst Street and Wilson Avenue area at around 10:15 a.m. He was subsequently rushed to North York General Hospital, where he was pronounced dead a short time later.

The discovery came as more than 100 officers conducted a frantic search of the area for the boy, who was seen on surveillance camera wandering away from an apartment building on Neptune Drive at around 4:05 a.m.

“You see the picture of that beautiful little boy … and the video of the child going out into the cold at (4 a.m.). It really is a tragic set of circumstances," Toronto police Chief Bill Blair told reporters after learning of Elijah's death Thursday.

"I think it will remind all of us to go home and hug our kids a little bit more and I think we all will grieve for that child and for their family and for their community for their loss."

Police previously said that he was put to bed at around 9:30 p.m. and was reported missing at around 7:30 a.m. when his family woke up and were unable to find him.

According to a neighbour at the scene, he was staying with his grandmother in the apartment. He was wearing a T-shirt, a diaper and winter boots when he left the building.

At the time Elijah left the building the temperature was - 17 C but it felt closer to - 28 with the wind chill.

We regret to announce that 3yr old #Elijah has died. Our thoughts are with his family and all affected by this tragedy #PrayForElijah ^sm

The frigid conditions prompted police to launch a massive search early Thursday that at one point involved at least one officer from every division in the city.

A helicopter on loan from York Regional Police was also brought in to assist with the search as were officers with the Toronto Police Service Mounted Unit.

“Obviously the police response was aggressive and massive from the early going because of course a missing three-year-old child in these sorts of temperatures is something that we treat very, very seriously,” Insp. Frank Barredo told reporters at the scene Thursday morning. “No shortage of resources were dedicated to this.”

The heartbreaking loss of #Elijah is felt by so many today. We continue to send our thoughts and prayers to his family and loved ones.

The search drew in countless volunteers and was widely discussed on social media with thousands of people tweeting out a photo and description using the #FindElijah hashtag and later offering messages of support using the #prayforelijah hashtag.

Speaking with reporters earlier in the day, a neighbour described Elijah as a "good-natured little boy" who is a "little shy."

With heavy hearts we all feel the same emptiness. Elijah lost his fight. #ElijiaRIP Thoughts and prayers to his family ^cc

Meanwhile, at Toronto police headquarters where he was attending a Toronto Police Service board meeting, Mayor John Tory called the incident a "terrible tragedy."

“It is just an unspeakable tragedy. I am a father and I am a grandfather and I can’t imagine this kind of thing,” he said. “I just hope all parents across the city just remind themselves to take every precaution they can to make sure their kids are safe inside their homes. It is a terrible tragedy.”

By Thursday night, a memorial that included flowers, teddy bears and cards could be seen outside the Neptune Drive apartment building where Elijah walked out of early Thursday morning.

Tabatha Marier, who said she has in laws that live in the area, brought flowers and a card to add to the memorial.

Though she didn’t know Elijah or his family personally, Marier said she and other families wanted to “reach out.” 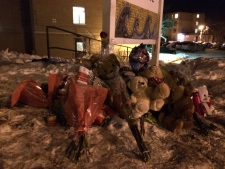 A memorial for three-year-old Elijah Marsh is seen outside an apartment building on Neptune Drive on Thursday, Feb. 19, 2015. (CP24/Tracy Tong)

A three-year-old boy that has went missing from a Neptune Drive home is shown in this handout photo. (Toronto Police Service)

A three-year-old boy that disappeared from a Neptune Drive home and was later found without vital signs in a backyard nearby is shown in this surveillance camera image.