'We are coming for you and we are going to find you:' Peel police get $20.5M to crackdown on violent crime 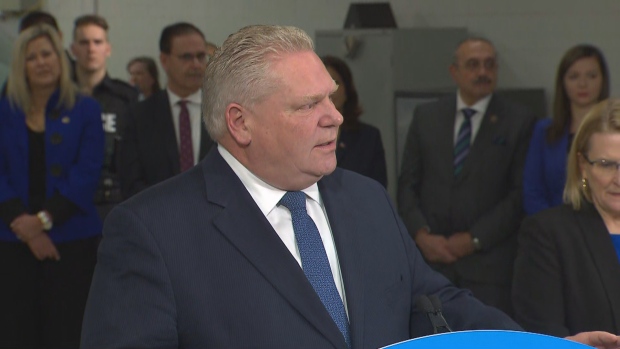 Premier Doug Ford speaks with reporters at a funding announcement in Mississauga on Friday.

The provincial government will provide Peel Regional Police with $20.5 million in additional funding to combat violent crime, money that Chief Nish Duraiappah says will help his officer pursue “complicated investigations” that often demand “many, many hours.”

The investment, which is coming from the Ford government’s $195 million Community Safety and Policing (CSP) grant program, was announced during a news conference in Mississauga on Friday morning.

“This money will help our police officers work directly with members of the public to improve safety and it will also allow our officers to target organized crime at its source and work with prosecutors to lock up criminals,” Premier Doug Ford said in making the announcement. "My message to the criminals that are watching us now: we are coming for you, we are going to find you and we are going to lock you up for a long time."

Part of the funding will go specifically towards the Peel Regional Police Community Mobilization Program, which works directly with members of the community on various projects to improve public safety, such as neighbourhood watches and town hall meetings.

The rest of the money, meanwhile, will go towards various other initiatives aimed at cracking down on violent crime.

“We know this region statistically is still one of safest regional municipalities in Canada, however that being said the confluence of factors which cause problems in our communities are ones that require responses that are sometimes above and beyond our capability of deploying officers and investigators to,” Chief Nish Duraiappah said. “Violent crime and the nature of these incidents require significant resources and the skills to investigate them.”

The funding comes 17 months after the Ford government provided the City of Toronto with $25 million to help crack down on violent crime. The province also provided the city with $1.5 million in emergency funding amid a spike in gun violence this past summer.

Speaking with reporters at Friday’s announcement, Brampton Mayor Patrick Brown thanked the province for recognizing that gun and gang violence is “not a Toronto problem but a GTA-wide problem.”

“You should never underestimate how sophisticated gangs are, never underestimate how they appreciate where there is diminished resources and where there is, unfortunately, a more convenient place to engage in this activity,” he said. “With this help you are helping ensure that Peel Region is not a convenient place for another shooting, you are ensuring that we have the tools to fight this insidious activity.”