'We are ready to go to work:' Healthcare workers from Newfoundland arrive in Ontario 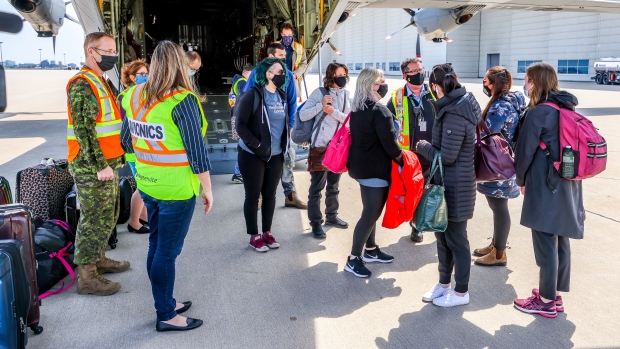 Healthcare workers from Newfoundland and Labrador arrive at Pearson International Airport. The team of nine will be helping to treat COVID-19 patients in hard hit Toronto hospitals. (Tom Podolec)

A team of nine healthcare workers from Newfoundland and Labrador have arrived in Toronto to help treat COVID-19 patients in some of the city’s hardest hit hospitals.

They are the first reinforcements to arrive in Ontario since the province issued a call for more than 600 healthcare professionals nearly two weeks ago.

The Canadian Armed Forces to deploy nine ICU nurses and up to three multipurpose medical assistance teams in the province as well, though it is unclear when they will arrive.

Public Safety Minister Bill Blair also said on Tuesday that 62 health professionals from the federal government have volunteered to help in Ontario hospitals, including doctors and nurses who work in prisons or for Indigenous Services Canada.

“We’re ready to go to work. Honestly, that was our intent for coming up here, to join the teams within University Health Network and the critical care units and on the COVID floors. We're ready to get orientated, to get to know the nurses and physicians and the other interdisciplinary team members and get to work and hopefully relieve some of these healthcare providers that have been working tirelessly over the past year,” Critical Care Nurse Practitioner Jennifer Hanks told reporters upon arrival.

The number of COVID patients in intensive care units in Ontario has more than doubled over the last month and now stands at 875.

Ontario has ordered all hospitals to cease all elective and non-emergent procedures in an attempt to free up capacity but with COVID patients now taking up roughly one out of three available beds in intensive care units concerns are building that healthcare workers will eventually have to make impossible decisions about who to provide the highest level of care to.

Meanwhile a temporary field hospital that was set up on the grounds of Sunnybrook Health Sciences Centre earlier this month has now begun accepting patient transfers, underscoring how dire our current situation is. The field hospital is currently staffed by doctors and nurses from Sunnybrook though hospital officials say that military medics could eventually be relied upon to treat patients once they are deployed.

“I’m very grateful, very thankful that these health care providers from Newfoundland have agreed to volunteer to help us out here in Ontario with the difficult situation we’re having right now, especially with our ICUs,” Robin Martin, the Parliamentary Assistant to Health Minister Christine Elliott, told reporters after formally welcoming the Newfoundland team to Ontario. “We are just so grateful for their help and grateful that they are willing to come and to assist us.” 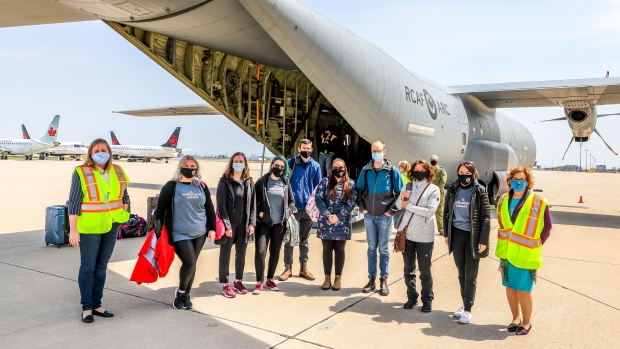 The arrival of the doctors and nurses from Newfoundland comes one day after the province requested military and Red Cross support amid a devastating third wave of the pandemic.

The help, however, may only put a dent on the strain in the healthcare system given the need for hundreds of additional doctors and nurses.

“We are continuing our search internationally to see if there are any teams that can come from other countries to help us but as you know there are many countries in the world that are facing the same situation that we are as well,” Elliott said earlier on Tuesday. “We have made some requests in the U.S. and we are still waiting to hear specifics from them but we also looked to other countries, such as the Philippines for example, and are still waiting to hear on that.”

Elliott said that Manitoba has also offered to put a call out to retired healthcare workers to help out in Ontario hospitals but she said that the province hasn’t received any formal offer of support at this point.