'We have dozens of beaches:' Tory urges residents to practice 'common sense' and avoid huge crowd scenes amid heat wave 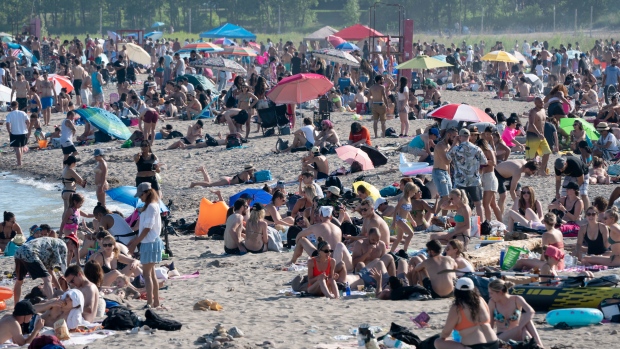 Mayor John Tory is urging Toronto residents to practice a little “common sense” and to seek out less crowded areas should they head to a beach to cool off this weekend.

Environment Canada says that temperatures will reach a high of at least 32 C for each of the next seven days but it warns that humidex values could make it feel as hot as 36 to 39 between now and Sunday.

Large crowds have also been reported at Wasaga Beach, where town officials have responded by closing part of the beach and reducing the number of beachfront parking spots by 50 per cent.

Speaking with CP24 on Friday morning, Tory said that the city has no plans to limit attendance at its beaches but does expect people to continue to avoid “large crowd scenes” as much as possible.

He said that there are numerous beaches in the city that haven’t drawn massive crowds as well as six outdoor pools that will remain open until 11:45 p.m. during the heat wave, albeit with capacity reduced to 25 per cent to ensure physical distancing.

“I think it is just a matter of people making a conscious decision to say there are other beaches to go to. We have dozens of beaches in Toronto. There are pools, there is the Toronto Islands now and there are patios,” he said. “I think a lot of it just has to do with common sense as opposed to us trying in a city of three million people to close beaches on the hottest days of the year. If people regulate their own behaviour and cast an eye and see if it is a crowd scene when they get there, then they probably shouldn’t add to it.”

Back on May 23 thousands of people flocked to Trinity Bellwoods Park in contravention of physical distancing guidelines.

The incident made national headlines but Tory pointed out on Friday that it hasn’t happened since then, largely because “people just decided they were going to go somewhere else.”

He said that he is hopeful that a similar effect will play out at some of the beaches that have drawn large crowds in recent weekends.

“We want people to have a good time in the summer; we are just trying to deal with a pandemic here,” he said. “We have done pretty well as a city and people deserve credit but we are still in the middle of it so focus on what we have to do to get everybody healthy and keep everybody safe.”

During his daily briefing at Queen’s Park on Friday, Premier Doug Ford said that he would leave it up to local officials to decide whether they want to close beaches but has no plans to do so with provincial beaches.

He said that he would not personally go to a "jam packed beach" right now and believes that there are plenty of less crowded alternatives for people looking to cool off.

“It is just common sense,” he said, echoing Tory’s remarks. “If you go to a packed beach find another place if it is jammed pack. I wouldn’t go to a jam packed beach. Just find a more secluded beach. We have a lot of provincial parks around the province that are open right now and they may not be as busy as more popular beaches.”