‘We have no bicycles,’ Toronto bike shop says as heightened demand continues in COVID-19 pandemic 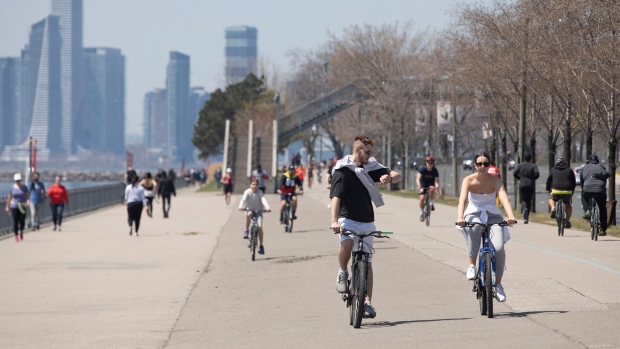 People exercise in the warm weather in Toronto, on Sunday, May 3, 2020. THE CANADIAN PRESS/Chris Young

A shortage of bicycles continues to be a challenge for Torontonians who are looking for ways to stay active and enjoy the warmer weather, as the province faces a third wave of the COVID-19 pandemic.

With bikes being such a hot commodity right now, bicycle retailers and suppliers are struggling to keep up with extremely high demand.

“It’s just a massive challenge. We’re in business to sell bicycles… and we have no bicycles,” Michael Cranwell, general manager at Gears Bike Shop told CP24 Tonight on Friday.

Gears Bike Shop was formed in 1988 and has expanded across southwestern Ontario with shops in Toronto, Mississauga and Oakville.

The company says it has been overwhelmed with demand since last spring, as people were eager to get their hands on a set of wheels to enjoy during the pandemic.

Last spring, the province was in the midst of the first wave of the novel coronavirus after the pandemic was declared in March 2020.

The provincial government enacted a state of emergency and temporarily shuttered non-essential businesses to curb the spread of the deadly disease.

With people encouraged to stay home unless going out for essential reasons, including going to work, buying groceries, and exercising, people flocked to bike shops for an activity to safely do outdoors.

“By June, July, we were almost out [of bikes] and it was around the same time we were realizing that there were going to be significant delays,” Ira Kargel, partner at Gears Bike Shop, said.

“And as the winter has gone by, people have thought ‘oh well they've had all winter to restock’ and the truth is we haven't. So this year we're starting without full stores of bikes, we're already empty. And many of the suppliers have pushed back the dates for delivery to our country well into Christmas and January and next year,” she added.

Kargel added that their shops are taking pre-orders for new bikes but that they don’t have any to sell right now.

Cranwell said a huge obstacle is also delays from bicycle parts suppliers who are receiving overwhelming demand from across the globe.

“Demand on basic parts like, let's say, chains and crank sets, you normally would project about 120 per cent growth on an extremely good year. Moving into this year, demand on parts and accessories alone to actually build the bicycles, is running in excess of 200 to 250 to almost 300 per cent depending on what's going on, and no factory can keep up with that,” he said.

Cranwell said manufacturers are working around the clock to fill orders but are unable to keep up.

“...Machinery only goes so quickly, and raw materials are also heavily impacted, you can only gather that aluminum and carbon fiber and various products that you need. Again, the entire supply chain itself is struggling to keep up with absolutely unprecedented demand.”

The bike shop has received thousands of orders but Cranwell said they can’t confirm at this time when people can expect to get their hands on a new bike.

Kargel is asking customers to be patient while they wait for the supply chain to regain control.

“We want people to have bikes and so we're trying and we're pleading with people to understand that even though when you're outside looking around the world [it] looks normal [but] it is not normal in bike shops,” she said.

Along with unprecedented demand for bikes, service calls are at an all-time high forcing the company to turn down tune-up requests and only accept calls about emergency and safety issue repairs.

Kargel said the company is looking to hire more mechanics to help fill the gaps during this hectic time.

“...Gears is actively searching for professional mechanics to hire. We're ready to pay more people to come and help us so we can help more people,” she said.

Public health officials recommend people go outside to exercise while practising physical distancing and wearing masks if they are unable to stay two metres away from others.