'We must prevent what happened from happening again:' patient ombudsman on LTC homes 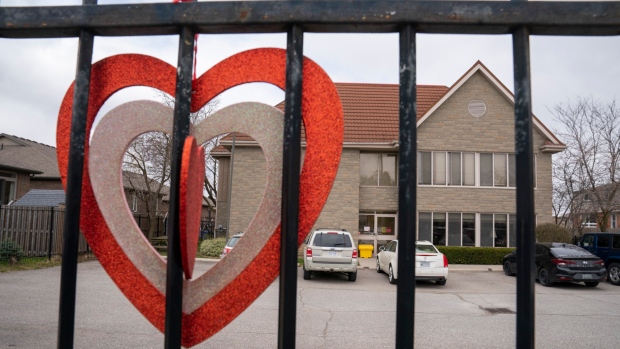 A heart hangs on the fence at Anson Place care centre in Hagersville, Ontario on Wednesday, April 22, 2020. THE CANADIAN PRESS/Frank Gunn

TORONTO - Major changes are needed in Ontario's long-term care system, the province's patient ombudsman said Thursday as the office made a series of recommendations to deal with a resurgence in COVID-19.

Enhancing whistleblower protections, improving communications and overhauling the visitation system were among the suggestions included in the office's preliminary report.

It also recommends that all health-care providers have “backstops” and contingency plans in place to deal with outbreaks of the novel coronavirus.

“What is clear is that we must prevent what happened from happening again,” said Cathy Fooks, who took over the job in mid-July - weeks after the office began a formal investigation into the long-term care system.

That investigation continues, Fooks said Thursday, but the office wanted to release an interim report due to the volume of complaints it received.

“We wanted to try to reflect back to the system as quickly as possible what we were hearing from residents and caregivers and staff,” Fooks said in an interview.

“We felt the seriousness of it was such that we shouldn't wait until next year.”

As of Thursday morning, the province reported 1,954 deaths from COVID-19 among residents of long-term care and eight deaths among staff. There were 57 homes currently dealing with outbreaks - up four from the previous day.

The ombudsman report includes the stories of 17 people who complained to the office, including long-term care workers and family members of residents.

One staff member who isn't named in the report alleges that workers at one facility were forced to keep working even after testing positive for COVID-19, and that residents with the virus were housed four to a room.

“Certainly a number of the stories that we were hearing were really distressing,” Fooks said.

The ombudsman's recommendations are non-binding, but Fooks said she hopes long-term care providers and the provincial government receive the report “in the spirit that it's given” and use it to plan for a second wave.

Merrilee Fullerton, the province's minister of long-term care, said the government was doing just that.

“We take those recommendations to heart,” Fullerton told reporters Thursday, noting that while some whistleblower protections are already included in the province's Long-Term Care Homes Act, they could be more robust.

“We need to make sure that people can come forward with concerns, shortcomings or issues ... because the more these things are hidden, the harder it is to find them and address them.”

Opposition NDP Leader Andrea Horwath, whose party is set to release its plan for overhauling long-term care on Friday, blamed successive Liberal and Progressive Conservative governments for neglecting the sector.

She said the current Tory government should have spent the summer preparing for a second wave.

The patient ombudsman's “clear set of recommendations will ensure there is no repeat of the tragedy that unfolded in the first wave of COVID-19 through increased measures to protect against a second wave, many of which are already in place now,” Donna Duncan, the association's CEO, said in a statement.

The Ontario Caregiver Organization, a non-profit group funded by the Ministry of Health, said the patient ombudsman's report “reinforces” what it's heard about the disruption COVID-19 has caused.

“We know that family caregivers and health-care providers have experienced extreme challenges as a result of the pandemic,” said CEO Amy Coupal. “We welcome the Patient Ombudsman's report and its recommendations.”