'We will find you': Police search for two suspects after shootout, carjacking in Mississauga

Two suspects have been arrested, and two others are outstanding after a shootout, and a vehicle with a child on board was carjacked in Mississauga Friday evening.

The incident began around 7 p.m. at Burnhamthorpe Road and Confederation Parkway.

Peel police Const. Akhil Mooken told reporters that officers from the Central Robbery Bureau and the tactical unit were attempting to arrest an individual when a suspect fired shots at the officers who then returned fire "to protect themselves."

Two suspects were arrested at the scene while two others remain at large. 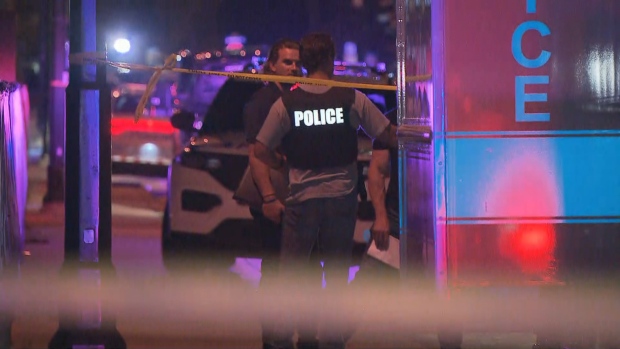 Mooken said one of the suspects used his vehicle and rammed a tactical vehicle, nearly striking one of the officers. He then escaped on foot.

A short time later, Mooken said the suspect carjacked a pickup truck with an eight-year-old girl inside and fled the area.

Police were able to locate the truck and became engaged in a pursuit.

"And while being pursued, the suspect essentially threw the child out of the vehicle," Mooken said.

He noted the officers stopped to secure the girl, who did not suffer any physical injuries.

The vehicle was later located abandoned less than four kilometres away near Eglinton Avenue and Creditview Road.

After an extensive search that saw the use of York Regional Police helicopter, Mooken said officers are satisfied that the suspect is no longer in the area and have since cleared the location. 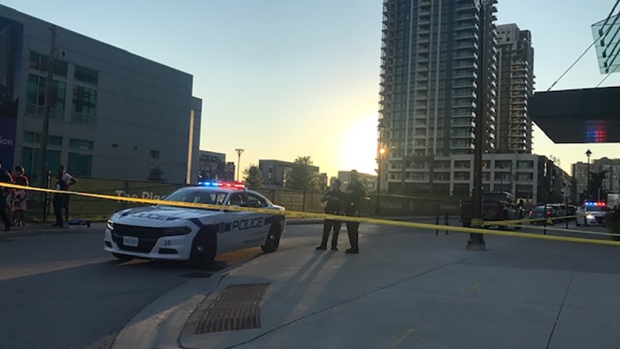 Police are also looking for a second suspect described as a black male, five-foot-eight to six-feet tall, with a medium build. He was wearing a white tank top and has a gold headcloth covering, crystal-like earrings, white ankle socks, and no shoes.

Mooken noted both suspects are believed to be armed.

The four suspects are wanted in connection with a series of financial and pharmacy robberies across the GTA, Mooken said.

He said police have obtained surveillance footage in the area that shows clear images of one of the suspects.

"My message to the suspects is clear. We will find you," Mooken said.

"Speak to a lawyer, make arrangements, and turn yourself into our investigators. We will dedicate as many resources as possible as we have that we need to find you."

While there have been no reported physical injuries in relation to the shooting, Mooken said the whole ordeal must have been traumatic for the young girl.

"I know I said there's no physical injuries, but the emotional and the mental injuries…without a doubt those are going to be present," he said.

"As a police service…we will provide them with the support that they need at this time to help deal with this." 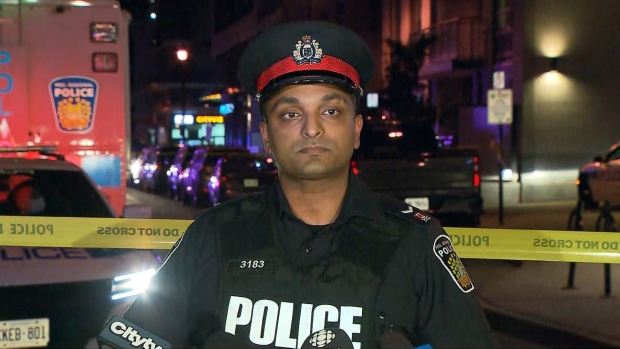 Mooken said it must have also been traumatic for the child's parents.

"You're simply driving essentially, and somebody carjacks you and takes your child. We feel helpless as a parent," he said.

"I can't imagine the emotions that they're going through at this time, but I'm sure they're happy that the child has been reunited."

Mooken said there were probably several people out in the streets during the "brazen" incident.

"This is a highly-populated area, and the sheer disregard for other people by the suspect is concerning to us as a police service," he said.

Martin Eret and his girlfriend were sitting in the balcony of his fourth-floor apartment when he heard three consecutive gunshots coming from the parking garage.

"I was already freaked out by the amount of police cars that came out of nowhere," he said. 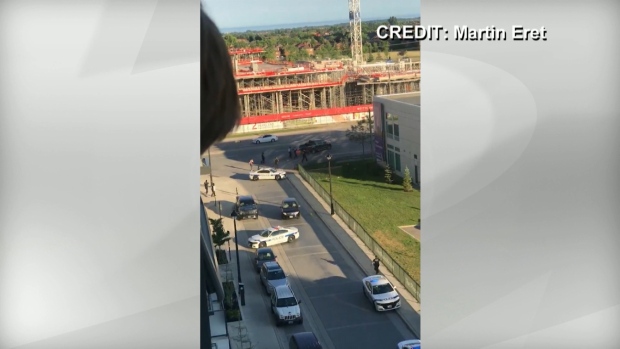 There was no commotion for approximately ten minutes, Eret said, before a black truck came out of the garage.

He then saw two people trying to get in the truck or being pushed out of the truck.

The vehicle then drove off, leaving behind the two people who Eret said were later led into police cars.

"It's scary. I drive down this road every single day for work."