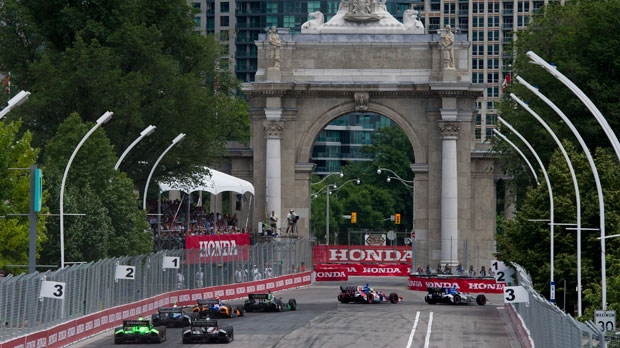 The cars race into turn one on the first lap of the Honda Indy in Toronto on Sunday, July 8, 2012. (The Canadian Press/Frank Gunn)

The Honda Indy is in Toronto this weekend, shutting down traffic in downtown’s west end.

Lake Shore Boulevard was shut down Tuesday night between Strachan Avenue and British Columbia Road to accommodate the race track.

The roadway won’t reopen until Sunday at midnight.

Strachan Avenue was also shut down Tuesday between Lake Shore Boulevard and Fleet Street. That too will remain closed throughout the weekend.

Officials say there will be no eastbound or westbound traffic during the closure and that the only access to Ontario Place will be from Lake Shore Boulevard at the foot of Strachan Ave.

Motorists looking to travel east or west are asked to use either King Street or the Gardiner Expressway.

This event will be the second attempt at the circuit's new doubleheader format, with top-level races on Saturday and Sunday. The Indy attempted this last month in Detroit but was met with many challenges, including a large pile-up. Driver fatigue was cited as a possible reason for the crash.

Thousands of people are also expected at the annual Salsa on St. Clair festival this weekend, forcing more road closures.

The festival, which takes place between Winona Drive and Christie Street, will take place both Saturday and Sunday.

Public transit riders will have access to a bus that will detour the area through Davenport Road, -- which is located one block south of St. Clair Avenue – between Bathurst Street and Oakwood Avenue.