A journalism lecturer at Western University in London, Ont. said he recently discouraged a student from seeking an internship at the CBC radio show ‘Q’ after hearing an unsettling story from a recent graduate about former host Jian Ghomeshi.

Western faculty member Jeremy Copeland said a few years ago, a former student had attended a taping of the CBC show in Toronto in hopes of landing a job at the network.

“While she was there… Jian kind of made, what sounds like, inappropriate advances at her,” Copeland told CP24 Monday afternoon.

Two years passed without a student inquiring about an internship at the show until this past September, he said.

“Before our internship meeting, somebody I know had told me about the Toronto Star investigating their allegations against the host of ‘Q’ so that is sort of why I spoke up when I did,” Copeland said. “If it is a young female student that wants to go there, I don’t think that is a good idea.”

Copeland went on to say that students who accept internships at CBC Toronto have had “great experiences.”

“They are really lucky to get in there. It is a very competitive place to get in and there is a reason for that,” Copeland said. “I guess it is just maybe one bad apple.”

Ghomeshi was fired from the CBC a little over a week ago after the network saw what they have described as "graphic evidence" that Ghomeshi had caused “physical injury” to a woman.

Last week, The Star published detailed accounts from nine women who say they were physically and sexually assaulted by Ghomeshi.

Ghomeshi has denied any wrongdoing and maintained that all the relations were consensual.

Ryerson’s journalism program says the department has not received any complaints of harassment or issues with personal safety from former interns of ‘Q.’

“In the past few days, I have spoken personally with every faculty supervisor who has been involved with any Ryerson journalism internship at CBC (anywhere in Canada or internationally), including Q, over the past 10 years at least. I have also spoken with a few students and former students who have interned at Q,” Ivor Shapiro, the chair of Ryerson’s journalism program, said in a written statement.

“None of us has heard of any concern expressed by an intern at CBC suggesting issues of personal safety or harassment of any kind regarding anyone at CBC who might have supervised or worked with our interns.”

The heads of Carlton University’s journalism department have released an open letter to current and former students, assuring them that as soon as the allegations came to light, faculty members immediately started searching their records to see who had done internships at CBC Toronto.

“We now know that 73 of our journalism students had internships or work placements there between 2003-2014. Although the CBC has been responsible for the students’ work assignments, according to the records that we have, one student was placed with the program Q in that time period,” the open letter read.

“We’ve been working in close cooperation with our university administration and can tell you that we have no information at this time that would lead us to believe there has been any connection between any of our students and the allegations that have been raised.”

Toronto police are in the early stages of a criminal investigation into the assault accusations after three women, including ‘Trailer Park Boys’ actor Lucy DeCoutere, came forward over the past few days.

During a press conference Saturday, Toronto Police Insp. Joanna Beaven-Desjardins said that police have not yet requested an interview with Ghomeshi. Mark Pugash, the director of communications for the Toronto Police Service, told CP24 Monday that police are at a very sensitive stage of the investigation and they will not be providing an update at this time.

Ontario Premier Kathleen Wynne also addressed the Ghomeshi allegations Monday, saying she is open to examining the issue of sexual harassment in the workplace.

While speaking in the legislature today, Progressive Conservative MPP Laurie Scott asked Wynne to consider an all-party committee to study the issue in light of the allegations against Ghomeshi. Wynne said she would not yet commit to a specific process but said she is willing to do whatever is necessary to address this “very serious and disturbing issue.”

Ghomeshi, who was been dropped by crisis management firm Navigator and his local PR agency rock-it promotions late last week, was dealt another blow Monday when the Polaris Music Prize announced that it had removed the former host from its jury.

Ghomeshi, who was once a member of the band Moxy Fruvous, was a long-time member of the jury, which contains more than 200 media professionals who vote annually to award a $30,000 prize to the best Canadian album of the year. 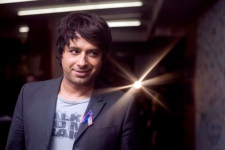 Jian Ghomeshi in Toronto for the recording of the 'Canada for Haiti' benefit show on Jan. 22, 2010. (The Canadian Press / Chris Young)