LONDON, Ont. - Hoisting signs and chanting slogans denouncing sexual violence, hundreds of students walked out of classes at Western University on Friday to demand a change in what they described as a toxic campus culture.

The large gathering - which packed a green space on the London, Ont., school's campus - came days after a series of sexual assault allegations surfaced during the university's orientation week, rattling students and prompting administration to announce new safety measures.

“Stop this violence, no more silence,” the crowd chanted shortly after students left their desks at noon.

“It's been terrifying,” she said as she held up a sign at Friday's protest. 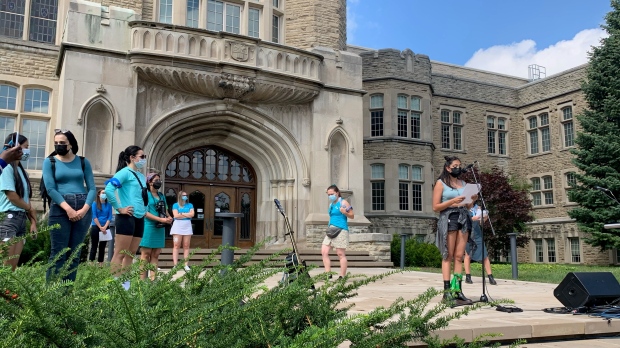 Katie Flannery, another student, said she'd been harassed by young men at the university as recently as a few days ago when she was walking home from class at night.

“A car full of guys pulled up, shouted at me and honking the horn, and it was ridiculous,” she said. “It's so disheartening to deal with that especially after the terrible events that took place.”

Morgan McMillan, who is in her first year at Western after transferring from another school, said she's on edge at night on campus.

“It's been kind of scary,” she said. “I had a night class last night, done at 9 p.m., and walking home from that class I was on the phone with a friend in case something happens.”

Western University and London police have said four women have come forward with formal complaints about being sexually assaulted on campus recently.

Police are also investigating allegations made on social media of mass drugging and sexual assaults at the Medway-Sydenham Hall residence on campus during orientation week. The force has said no one has come forward with a formal complaint on those online allegations. 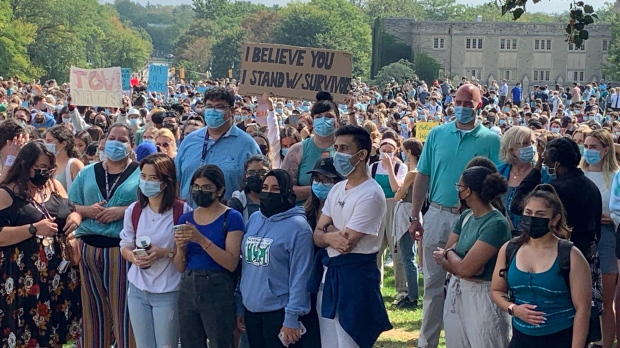 Some students at Friday's gathering wrote “love letters to survivors” that were hung on a clothesline. “Hi bestie, you are doing so great,” one note said. “Stay Strong. I believe in you, we all do.”

Later, students who described themselves as survivors of sexual violence shared their experiences with the crowd.

“If I am drunk and I smile at a man and he assaults me, suddenly no one is too sure who should be responsible,” she read.

“It's alcohol, they cried, it's party culture. It's boys who are taught not to take no for answer. It's men who discovered the system is on their side. It takes the work of a community to uphold rape culture.”

Elliott told the crowd she was a victim of rape.

“Speaking out and reliving trauma is a painful process. Today, Western students have shown incredible strength and resilience. Western supports today's walkout and we will continue to move forward to enhance security and safety on campus,” he said in a statement.

“We will continue to listen to our students and be guided by their needs as we work towards a better campus culture so that all students - present and future - have a community they can trust.” 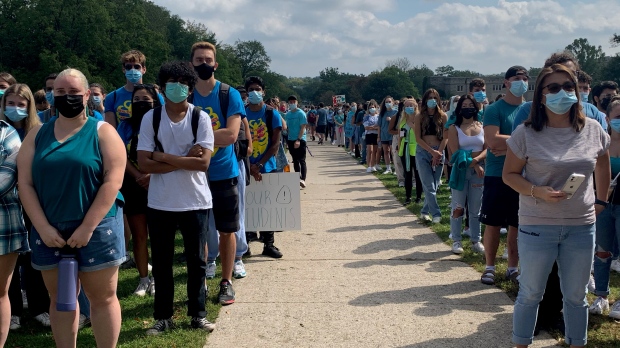 Western announced Thursday that it will require students in residence to take training sessions on sexual violence and consent as it works to address what it describes as a problematic campus culture.

The measure is part of a new action plan that will also see the university hire 100 new “safety ambassadors” - a mix of upper-year undergraduates and graduate students who will work overnight in residences.

The school also plans to create a task force that will take “a comprehensive look” at student safety.

The province said Thursday that post-secondary institutions would have to update their sexual violence policies to better support students who come forward with complaints.

Students who report sexual violence should not be disciplined for breaking school rules about alcohol and drug use at the time of an alleged incident, and questions on sexual history should not be part of the reporting process, the province said.

Eunice Oladejo, the vice-president of external affairs with Western's University Students' Council, said the change is a good first step.

“This will make survivors feel more comfortable in the reporting and disclosure process, because as we know, there is stigma around it,” Oladejo said.

The series of allegations at Western came to light as the school also dealt with the death of one of its students. 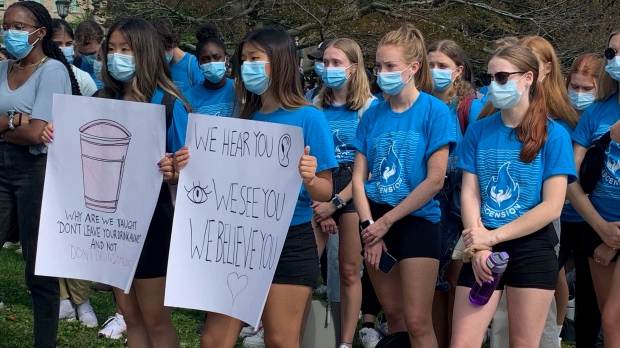 Friday's protest held a moment of silence for Gabriel Neil, an 18-year-old first-year student, who died after being assaulted just off campus last week.

“Gabriel, who came to Western only a couple of weeks ago with aspirations and dreams, was the victim of a senseless, fatal crime in a community which should have instead given him the opportunity to thrive and grow,” said Hayden Van Neck, a third-year student.

“His loss has left our community heartbroken.”

Ziyana Kotadia, vice-president of university affairs with the Western student council, said the recent events at the school had been tough on the community but also marked an opportunity for change.

“Student are grieving, students are processing,” said Kotadia. “But there's also a lot of variation and anger and momentum to see change on campus.”

-- with files from Liam Casey in Toronto.

This report by The Canadian Press was first published Sept. 17, 2021. Photos by CP24's Beatrice Vaisman